Home » Weight Loss Before and After: Kristen Lost 20 Pounds With Sheer Determination 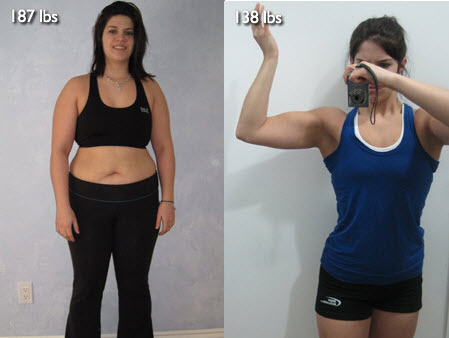 The car had sent me soaring 10 feet in the air, slamming my face into the ground.

Kristen Adamson was walking across the street in 2007 when the car hit her. A moment later, she woke up screaming, noticing the large gap inside her mouth from where her front teeth had been shattered, and realizing that she couldn’t feel her legs from the waist down.

“As I lay on the pavement staring at the blood fall from my face, I watched the driver of the vehicle flee the scene. And I knew at that very moment, that my life was never to be the same again.”

A few months went by, and Kristen was handling things quite well. Her physical healing impressed the doctors and she worked hard to get back to normal.

“Then one day I just broke. My strong outer shell gave way, and all of my buried fears, nightmares, flashbacks and depression came to the forefront.”

A year after the accident, she began having mood swings, cravings, hot flashes, and night sweats … nothing you’d expect at the age of 19. She went to the doctor.

“That was the day I thought my heart had stopped beating. To my absolute devastation I was diagnosed with Premature Ovarian Insufficiency, and told I have a 0 – 5% chance of conceiving naturally. Why me? I’m meant to have children. I tried to convince myself that there was still a purpose to moving on.”

One bad thing after another kept happening to Kristen. People made jokes about her being “cursed.” She lost control and felt helpless.

“Then, one day while surfing the net, I came across Bodybuilding.com. Little did I know, that day I had found something that was going to grant me back a sense of control and transform me into a healthier, happier and more knowledgeable me.”

“From that point on, bodybuilding, training, and fitness became my passion. I learned how to control my health and well-being, and how to use training as a way to de-stress and re-focus. Fitness became my answer – the sunshine that cleared my grey skies.”

Her transformation journey had begun, and this is how she changed her life with our help:

I started by reading the transformations of the week on Bodybuilding.com. Since I was 10 years old I had slowly packed on the pounds and no matter how hard I tried, I could never figure out how to shed them permanently. But after I read those articles, and stared at those before and after pictures, it gave me hope and the belief that it just might be possible for me too.

I remember reading stories about people who had overcome adversity and I felt inspired to do the same. I was tired of feeling like I had no power over anything in my life, and because I knew that there were other people out there who were able to turn their lives around through fitness, I felt empowered.

Next I started researching the articles on Bodybuilding.com. I learned about calories, macronutrients and the importance of a strong diet. Then I learned about training and muscle groups, and the myths about women and weightlifting.

Bodybuilding.com became my university for health and fitness, and I made sure that I attended every day!

After a couple of weeks of reading articles and watching videos, I finally took the first step to achieving the body I wanted; I set up a BodySpace account. I recruited my sister to take embarrassing ‘before’ pictures of me and then I logged all of my stats and information into my new profile page.

To my surprise, rather than getting hurtful comments about my ‘chubby’ body (something that terrified me), I received countless welcome notes and messages from other users, extending the offer to help me succeed.

Then I began noticing the scale change, followed by my clothes getting loose and my progress pictures getting better – there is nothing that feels better than this! The next thing I knew I was 20lbs lighter and I was feeling amazing!