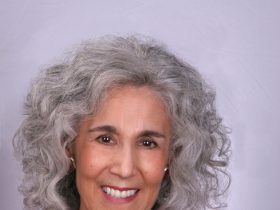 Weight Loss Success Stories: I Lost 20 Pounds And Became An International Author On Eating And Weight

How I Gained It: I’ve been heavy-set my entire life. I was the largest of three sisters. I was always active, but I ate fast food like no tomorrow and never realized how big I was getting. By the time I was a senior in high school, I was wearing a size 18. I never really took my weight seriously. People would tell me, “You’re too cute to be chunky’,” but I took it as a compliment and kept eating my double cheeseburgers.

I’m a comedian , and it wasn’t until I started performing on stage that I realized people are right up on you — they see everything. While I was telling jokes, I was always pulling down my shirt so people wouldn’t see my stomach.

Once I started getting noticed as a comedian, I was going on road trips with big names in the business and traveling for free to five-star hotels. My schedule was a problem — I was done performing about 12 a.m. and by then I was hungry. What’s open that late? Fast food was often the only choice. I did this almost every weekend for two years, which easily added 30 to 40 pounds to my already-chunky frame. But I still felt cute.

Breaking Point: My first TV appearance was on Def ComedyJam.I was a size 26 and wearing a men’s size large. But I wasn’t really worried — I was too excited about being on national TV.

Six months later, I was sitting in my hotel room one night after a show. I’ll never forget that night — it was about 2:20 a.m. and guess who I saw on TV? Me! I was eating three Chalupas from Taco Bell and I had to put my food down to really look at myself. The crowd was laughing, but I wasn’t — I looked like I weighed 300 pounds. Sure, the TV adds 10 pounds, but I was so heavy I think I saw smoke coming from my thighs where they were rubbing together.

For the first time in my life, I was disgusted with myself and at that very moment, I decided I needed to do something about my weight. When I arrived back into Chicago, I went straight home and dumped everything from my refrigerator and cabinets. I made up my mind: Food is not going to kill me.

How I Lost It: The first step for me was standing in front of the mirror completely naked (please don’t try and visualize that, especially if you’re eating.) I stood there and said “OK, what do I need to improve about myself?” The most important thing we all need to do is love ourselves, no matter how big or small we are. My advice to anyone losing weight is to first of all love what you see, and then work on improving what you like. Also, discipline is a must if you’re really serious about losing weight. Quick fixes don’t work. Everybody is different. You have to find out what it is that is keeping the weight on you.

After deciding to get healthy, I made appointments to cleanse my system of any toxins and waste build up in my body. I recommend getting a colonic. I also looked at my stress levels — stress builds up as yeast fat. You really can worry yourself fat! Relaxing is so important.

Myself, I went straight natural. Whole Foods became my best friend — I only eat organic now. I’ve totally eliminated processed foods from my diet, as well as dairy, sugar, soda, junk food and bread. I haven’t eaten fast food in eight and a half years, and I have no plans to change that. There are so many chemicals in the foods we eat today, and they’re killing us. I try to eat garlic everyday as it eliminates toxins from the blood. Plus, I drink almost a gallon of water a day, which I feel literally flushed the fat right out of me. I keep water nearby my at all times.

And then, there’s the exercise component. In 2001, I could barely run half a block. Now I run or walk at least 10 miles three times a week.

I still travel quite a bit, but I’ve made changes there too. I bring my own food with me where ever I go, and I always request that my hotel has a gym. But even if it doesn’t, I still work out — I use the hotel’s parking lot as my running track so I can get my run in before a show.

I was offered a large sum to do a commercial for a diet program, but I turned it down because I don’t believe in it. No amount of money would make me lie to my fans, especially when it comes to health. I truly believe that you have to create your own eating pattern. Trust me, you know what foods make your butt spread from east to west. Just stop eating them! There are no quick fixes. I know — I went from a size 26 to a size 10 all on my own.

It took Sonya a year to lose 80 pounds, and she’s kept it off for nearly a decade … and counting!