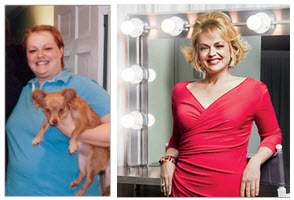 Actress-singer Kate Chapman used to get only the “fat lady” parts. Now that she’s lost weight and is half her former size, she’s taking Broadway by storm.

LIGHTBULB MOMENT: Realizing she lacked the stamina to play with her stepson

BIGGEST BENEFIT: Stamina to perform show after show and dance from curtain to curtain

From the time I first took the stage in a production of The Sound of Music when I was in elementary school, I knew I wanted to be on Broadway. I didn’t actually move to New York until I was twenty-one, and by then I was twenty pounds overweight. I went out for roles but received the same rejection time and again: “Your physique doesn’t match your voice.”

As a soprano who can belt out the chesty, powerful sound that Broadway musical directors want, I sang for shows like Saturday Night Fever, Dreamgirls, and Hair, but always for recordings or from the orchestra pit. Finally, after ten years, during which I gained sixty more pounds, I was cast in the Radio City Christmas Spectacular. I was so happy to be onstage, it didn’t matter that I was playing the pleasantly plump Mrs. Claus. That led to my being cast in more big-woman roles. My Broadway dreams had come true–just not as a leading lady.

In 2004, I married a man with two sons I adored. When I noticed that the six-year-old was gaining weight, I started taking him to the park to play. One day, struggling on the monkey bars, he asked me to show him how it was done. I was horrified when I couldn’t swing across three rungs without dropping. At that moment I heard a voice in my head say, You can’t help him if you can’t help yourself. I knew I had to change my sedentary, quesadilla-and McDonald’s-filled lifestyle and reinvent myself–for the both of us.

As hard as it is to revamp habits–swapping unhealthy foods for better choices, adding activity to each day–I had a bigger hurdle ahead: When cast in a show, the contract forbids you to change your physical appearance unless the executives approve a change. At the time, I was playing an older woman in Les Misérables, and I was nervous about asking for permission to lose weight. They agreed, on one condition: They would take my costumes in but would not take them out!

A NEW VIEW ON FOOD

I ditched processed foods and soon developed a taste for fruits, veggies, and whole grains. I also started walking at least thirty minutes a day and promised myself that I would run up the stairs that went from the basement dressing room to the stage. Because I changed seventeen times each night, this exercise added up. Within six months, I had lost fifty-five pounds, trimmed fourteen inches from my waist, and had my costume altered three times!

READY FOR MY CLOSE-UP

My next part after Les Mis was still as a heavyset woman, this time in Mary Poppins. But with the diet and exercise changes I’d made and stuck to, I kept losing. Three months later, I hit my dream weight of 130 pounds! Since I no longer looked like my character, I was cut from the show, but not for long. In a few months, I was recast, playing a much more energetic character. Since then I’ve understudied seven different roles in the show and can dance in longer numbers. I’ve also played Eva Peron in Evita–a dream come true. Now I regularly audition for the leading lady or pretty vixen, and my goal is to play Donna in Mamma Mia. I think I’d be great!

RELATED:   Weight Loss Before and After: Beverly Lost 10 Pounds And Became More Mindful About Her Food Choices

Napped between shows (and snored!)    Has tons of energy all day long

Watched TV at home when she wasn’t working    Takes gymnastics