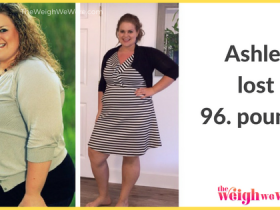 Weight Loss Before and After: Ashley Lost 96 Pounds And Gets Her Life Back

I was adopted as an infant into a Scottish/Polish family. I learned of my adoption when I was 7 years old. I’m not sure if this triggered something in me, but that is around the time that I began to hoard food and binge eat. I struggled with morbid obesity throughout my childhood, my adolescence and into adulthood.

I met my birth mother in 2010. I traveled up to the Serpent River First Nation, where she lived. Meeting her was one of the single most important moments in my life. Not only did it answer some of my identity questions, but it also gave me a good look into my future health issues. My birth mother was a type 2 diabetic and she had some significant and serious health struggles. I knew that I was headed in the same direction because of my weight issues.

I continued to struggle with weight loss for another year and a half after meeting my birth mother. I had a young son of my own and his well being was always on my mind. Although I would lose weight, I’d end up gaining it back as I wasn’t making any permanent changes in my lifestyle. During a family trip to Busch Gardens in the summer of 2011, an event happened that changed me forever. My son wanted me to go on rides with him and I was too big to fit. This crushed me on a few levels. I realized I was missing out on Julien’s childhood, I finally saw how my weight was affecting his life, and I know he felt like I was rejecting him because he didn’t understand. He was only three.

When I got back from vacation, I went to see my family doctor to discuss my options. I started to take Xennical (weight loss drug) which I used many times in the past. Although I lost weight on this medication, I would gain it back as soon as I stopped taking it. My doctor also made referrals for me for weight loss surgery and Dr. Poon’s Metabolic Diet (there are clinics in the greater Toronto area). Dr. Poon’s clinic contacted me first and I went for a consultation. I learned that I would have to give up all my comfort foods. Dr. Poon’s diet is a low carb, high protein, low fat, low sodium diet. No more processed carbs, refined sugar, dairy, or fruit. I basically was restricted to eating lean protein, leafy greens and veggies grown above ground. It was strict and structured. I balked at first, but figured I had nothing to lose and gave the diet two weeks. When I began Dr. Poon’s diet, I stopped using Xenical. After two weeks I lost over 11 pounds so I committed for another two weeks. Before I knew it, 15 months had passed and I lost 132 pounds.

I began running at 230 pounds. It was hard and I wanted to quit many times, but I promised Julien I’d go on rides with him in the summer of 2012. I was not going back on my promise. Since my running debut in March 2012, I have completed 2 half marathons and a 2 person relay in a 30K road race plus numerous shorter races. I was training for my first full marathon this past summer, but broke my ankle during training. I have been cast free since the second week in October 2013 and I am currently training for my next race, the Around the Bay 30K at the end of March 2014.

I have completely changed my lifestyle and currently follow the Paleo Diet for maintenance. Meeting my birth mother was an important turning point in my life. She encouraged me to get healthy so that I could avoid the health issues she had herself. Sadly she passed away on Halloween of 2012. My hope is to encourage as many people as I can with my story. I write a blog that I started at the beginning of my weight loss journey. I continue to blog about the trials and tribulations of maintenance and running. Everytime I think of eating off plan, I remind myself that nothing tastes as good as enjoying my son’s childhood.