Male Before And After Weight Loss: Norman Loses 50 Pounds And Finds His True Self 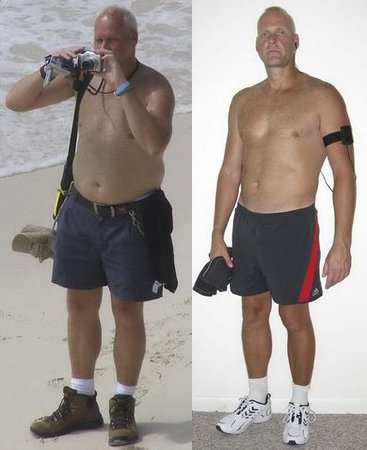 How long he’s kept it off: “It has been an ongoing and gradual process since late 2007,” he said.

Personal life: “I am a writer and instructional designer who works from home in Midtown Atlanta near Piedmont Park.”

Turning point: “There was no actual turning point,” he said. “As with so many people, the weight sneaked in bit by bit, inch by inch until one day I woke up and realized that I had had enough — enough gravy, enough grease, enough goodies.”

Diet plan: “I didn’t go for the quick fix. It’s a matter of slow change,” he said. “I’m a Southern boy; the first and hardest thing I did was cut out sweet tea. … I gradually worked in more changes on occasion [such as] baked not fried, low calorie instead of low fat.” He still eats what he wants but in moderation, and he doesn’t eat late at night.

RELATED:   Before and After PCOS - Maddy’s 105 Pound Weight Loss Journey

Exercise routine: “I hate gyms, so I bought the Perfect Pushup, the Ab Lounge and, eventually, the Perfect Pullup. I do abs daily and use the other equipment every other day,” he said. “I threw in a couple of 5- to 25-pound adjustable weights for a few additional exercises. And I started walking wherever I could: grocery store, local restaurants and coffee shops.” He also walks three miles a day five days a week.

Biggest challenge: “Food, I love food,” he said. “When I go out to eat, which I often do, I have to realize that [appetizers and desserts] aren’t necessary. And my mother, like a good Southern woman, she’s an excellent cook, and when I go home to visit, it’s always: ‘… Have some more gravy. Have another biscuit. I made banana pudding [double boiler, not instant] for dessert. Take home the leftovers.’ ”

How life has changed: “All in all, I just feel better, and I feel better about myself,” he said. “I didn’t realize how self-conscious I was 50 pounds ago. The after picture was taken on my 45th birthday — still a work in progress but the most fit I’ve ever been.”

Related ItemsOver 50 Pounds LostSEO
← Previous Story Male Before And After Weight Loss: Randy Drops 23 Pounds By Cutting Out Pizza
Next Story → How I Lost 65 Pounds: Cameron Drops Weight With Healthy Diet And Exercise