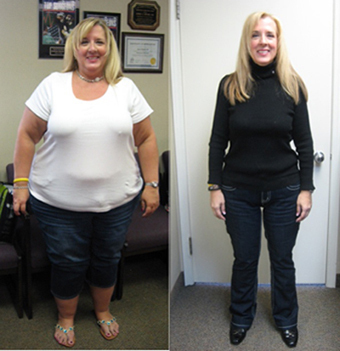 She loses 175 pounds and many dress sizes in 19 months

Michelle, a self-professed carboholic, vividly remembers January 2011. Then, 44, the St. Clair Shores resident was scared and withdrawn. Her efforts to lose weight were like a bad dream. She was following Weight Watchers, but after a week, Michelle was shocked to learn that despite her best efforts, she was actually gaining weight.

“I’ve been overweight a lot of my adult life,” she explains. When she was younger, Michelle had some successes with the Weight Watchers program. But now, her 5-foot-4-inch frame tipped the scale at 335 pounds. “It was the biggest I had ever been. The weight gain scared me.”

She had little energy. Her knees hurt. Her back hurt. She could no longer stand at the kitchen counter to chop vegetables. Michelle recalls, “My acid reflux was off the charts. I was living on Prilosec.” Her quality of sleep suffered.

Frightened and disappointed, Michelle sought the advice of her physician, Luke Elliott, M.D. With her family history of diabetes and being considerably overweight, Michelle was told she has a condition known as prediabetes. She not only had risk factors for diabetes, but heart disease and stroke, too. She remembers Dr. Elliot telling her, “It is not a matter of if you’ll develop diabetes, but when.” He encouraged her to attend one of Beaumont Health System’s free seminars on bariatric surgery.

Says Michelle, “The seminar was informative. They discussed the different types of weight loss surgeries, including outcomes, risks, side effects and benefits. Most importantly, they emphasized that surgery is a tool, and for it to be successful you need to adopt lifestyle changes.”
Motivated to act, she told herself, “I have the opportunity to reign in this situation. This (bariatric surgery) could be the right thing for me.”

This was followed by an informational appointment with Beaumont Hospital, Grosse Pointe bariatric surgeon, Abdelkader Hawasli, M.D. He discussed the gastric sleeve procedure. This laparosocopic surgical technique is minimally invasive. She researched her options and decided on the gastric sleeve.

Before surgery, Michelle attended many bariatric support group meetings. Most importantly, she felt a bond with the other members, as well as the medical staff who pledged their support before and after surgery.

Finally, on Sept. 27, 2011 Michelle had her surgery at Beaumont, Grosse Pointe. The procedure went well with five keyhole-size incisions. She experienced no pain and was back home on the second day.

Michelle had to adjust to eating smaller portions, along with the need to chew slowly and know when she was full. This took about six months. Five to six bites was the new norm. She learned protein is the star of any meal and you have to be judicious about what you put in your mouth.
Six months later, Michelle lost 100 pounds. She remembers Dr. Hawasli saying, “’I knew you would do it.’ That meant a lot to me.”

RELATED:   Men Before And After Weight Loss: Daniel Drops 108 Pounds On His Journey To His Goal Weight

Now nearly 19 months later, Michelle has lost 175 pounds and several dress sizes: from a 28 to 6.

Says Michelle, “Before surgery, I could barely walk to my car. I was exhausted.” Furthermore, it took a toll on her quality of life. “I was withdrawing. Because I was big and unhealthy, I put limits on my life. Today, there are no limits.”
Since her surgery, she has not taken one Prilosec and sleeps soundly. The one-time carboholic now has the fitness bug. With newfound energy, she has set her sights on a 5K run and some stand up paddle boarding on nearby Lake St. Clair. In the meantime, she loves her Zumba classes and walking her dogs.

“I feel younger. Even my friends say I look younger than I did 10 years ago,” she says.

Related Items100 Pounds Lostwalkingweight watcherszumba
← Previous Story From A Cage to the Stage: My 100lb Weight Loss Journey
Next Story → Finding “Me” Again