I Lost 55 Pounds: Nicole Shed The Weight And Got Her Body Back After Having a Baby 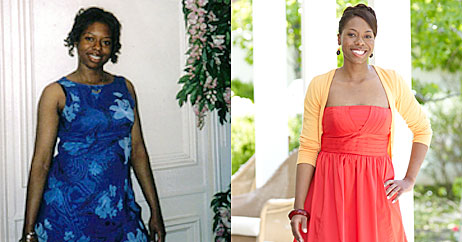 For four years after the birth of her son Marquis, Nicole Holmes held on to more than 60 pounds of baby weight.

For four years after the birth of her son Marquis, Nicole Holmes held on to more than 60 pounds of baby weight. Her diet of pizza and fried rice helped her through postpartum depression and new-mom stress, but it left her feeling sluggish at 200 pounds. The weight gain didn’t hit home, though, until her son asked if she was expecting a baby. “I will never forget that,” Nicole says. “It really woke me up.”

She got eating advice from her health-conscious mom. And she started walking 30 minutes a day to work and strength training at home twice a week. The strategy worked: Nicole dropped 55 pounds over four years—and now she’s launching a modeling career. “Knowing that I achieved my goal to slim down is a great feeling,” she says, “and being able to model in my new body is an even better feeling!”

Bloat-busters
Nicole replaced Sprite with lower-cal Snapple, VitaminWater, and iced tea. “I don’t have any bloating when I don’t drink soda,” she says.

Fun fat-burner
Nicole found inspiration at an Usher concert. “I wanted to be able to glide across the stage like that,” she says. Now she practices cardio by dancing along with her favorite music-video DVDs, Usher: The Truth Tour 2004 and Mariah Carey: #1’s.

Her gift
Dance classes. Broadway Dance Center in New York City has arranged for Nicole to attend 10 beginner jazz and hip-hop classes for free, so she can get back on the dance floor and show off her moves!