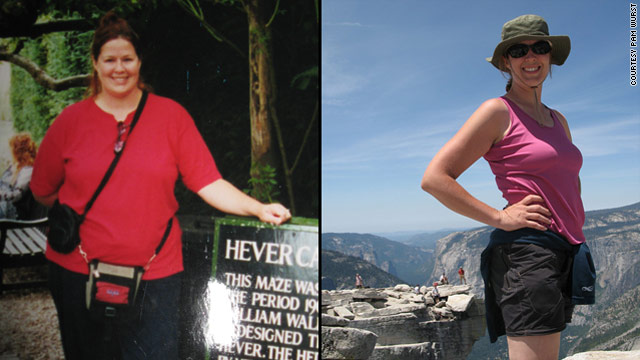 One of the triggering points for her to finally shed pounds was when a 5-year-old child patted her stomach and asked: “When is the baby coming?”

“I about died,” she said. “I wasn’t even remotely pregnant, just really overweight.”

Wurst, a 39-year old instructional designer, artist and consultant from Marietta, Georgia, lost about 100 pounds, starting from 264 to a low of 155. She lost most of her weight in the first nine months and has kept the majority of the weight off for more than six years.

iReporter Seth Leigh of San Tan Valley, Arizona, a computer programmer, has also struggled with his weight. He says he found the motivation to lose at least 110 pounds in nearly seven months so he could return to the Army National Guard in 2010 as an officer. (He has lost 135 pounds to date.)

He was 40 1/2 when he started his weight loss regimen. “I was facing an age deadline to get back and knew that once I turned 42 years old, it would be forever too late,” he said.

The new year represents a time to create resolutions and for many Americans, weight loss will be high on their lists.

And while Wurst and Leigh’s weight loss stories are a success, experts say most people will fail at following through on their resolutions.

Clinical psychologist Mark Crawford of Roswell, Georgia, says some people sabotage themselves by not being clear on their goals.

He offers some tips for getting it right.

1. Be specific about your goal.

Make sure you set something achievable and sustainable.

3. Establish a plan to reach your goal.

4. Set a time frame to reach your goal.

“Thirty days is a manageable goal to start with, and then go from there,” he said.

Above all, Crawford says stay the course.

“You will make mistakes,” he said. “You will have slip-ups, it is part of it.” But never use it as an excuse to give up.

A website supported by the National Institute of Health notes “the key to successful weight loss is making changes in your eating and physical activity habits that you can keep up for the rest of your life.”

And even if you don’t need to lose weight, it’s a good idea to follow healthy eating and exercise habits to keep you healthy throughout your lifetime.

How did Wurst and Leigh shed pounds?

When Wurst first started her journey, she set a goal of fitting into a size 14.

“I didn’t know how long it would take, but I felt like I could accomplish that in a year and I did,” she said. She now wears a size 10 or 12, which exceeded her plan.

Wurst said when she first started losing weight, she set a goal of exercising six days a week, and three of those days were 22 minutes of cardiovascular moves. After a few months into her Body-for LIFE-program, her job required her to travel a lot and she cut back her workouts to three to four days a week.

Wurst changed her eating habits, too, and stopped eating junk food. She tries to set a goal of eating four to six small meals a day to speed up her metabolism.

Her meals often include proteins with portions the size of her palm such as fish, chicken, nuts, tofu, mushrooms and eggs. She eats carbohydrates such as multigrain rice or multigrain crackers. Wurst tries her best to avoid processed foods and soda.

Leigh had a different plan to shed his pounds. At the height of his exercise program, he spent up to five hours a day working out. His routine included walking, biking, swimming, lifting weights and burning calories on a treadmill or Stairmaster.

The iReporter restricted his diet to about 1,500 calories a day.

“I didn’t have any time to waste or any days when I could afford not to exercise and eat properly if I wanted to qualify with the right weight for the Guard,” he said.

“I had a few times during that heavy-duty weight loss period when I would go out and ride 20 miles on my bike at 11 p.m. or midnight, because I hadn’t exercised yet that day and I wouldn’t let myself go to sleep having missed a day,” he noted.

Both Wurst and Leigh were motivated to reach their goals, but experts differ on their opinions on how much exercise is necessary and what type of foods to eat in order to lose weight.

For those of you planning a weight-loss program in 2011, consider guidelines the National Institute of Health offers on its website to help you get started.

Losing weight can be a challenge

Wurst said before her big weight loss, she tried a lot of methods to lose pounds, including drugs prescribed by her doctor.

“In 2000, they tested my thyroid and found it to be very slow, and I was prescribed 300 mg of Levoxyl a day and told it would help,” she said.

Six months later, she returned to her doctor in tears and said the drugs weren’t helping.

“My doc shrugged it off and said ‘fat people are jolly.’ ” she said. “I was heartbroken.”

She struggled for a few more years until a friend visiting from Tampa, Florida, in 2004 helped her get started on the diet and exercise regime he used.

“At last, I finally found a program that worked,” she said.

Leigh said he struggled for years as a heavy person and said he weighed more than 300 pounds for about an 11-year stretch.

For him, the motivation to achieve a dream is what it took to finally get him back to better health.

“I would imagine myself standing, in a nice new suit, in front of the Officer Selection Board, answering their questions about why I wanted to get back into the Army National Guard,” he said.

“I must have imagined that interview with the board a hundred times while working out,” Leigh noted.

Both Wurst and Leigh say the best part of their journey is they are now happier people than they were before the weight loss.

“I feel great and love to tell people about my story,” said Wurst.