**MYTH ALERT**: If I lift weights, I will bulk up because of my high testosterone 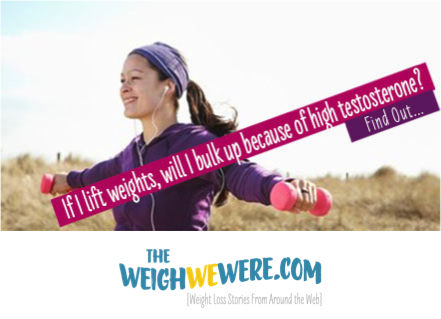 Fitness myth #3 – Weight lifting makes you bulky. Women are usually worried about this. Strength training can help you build muscle to burn fat which in turn can make you smaller! Fat takes up about 3 times as much space as muscle, so if you gained 5 pounds of muscle and lost 5 pounds of fat, you would be the same weight but you would actually be thinner.It is very difficult to build a lot of muscle. It takes hard work, heavy weights, and an increase in caloric intake. Very few people have to worry about gaining too much muscle. If it was only that easy!

Myth: Lifting weights is not good to do if you want to lose weight, because it will make you “bulk up.”

Fact: Lifting weights or doing strengthening activities like push-ups and crunches on a regular basis can actually help you maintain or lose weight. These activities can help you build muscle, and muscle burns more calories than body fat. So if you have more muscle, you burn more calories—even sitting still. Doing strengthening activities 2 or 3 days a week will not “ bulk you up.” Only intense strength training, combined with a certain genetic background, can build very large muscles.

Some women won’t approach a weight room, because they’re afraid they’ll quickly build manly muscles that take away from their femininity. Trainers said not to worry.

“It is impossible to accidentally bulk up,” said Eric Schmuecker, the fitness director at an Omaha YMCA, because only a very small percentage of women have the amount of testosterone in their systems to put on real bulk.

Schmuecker said he spends a lot of time explaining that women who do have bulk have had to work years to put it oncentimeter by centimeter.

“It takes so many grams of protein and calories to maintain a certain muscle mass. Most people — women and men —don’t eat enough to maintain that kind of physical stature,” Schmuecker said.

Regular folks need about 1 gram of protein per kilogram of body weight a day, experts advise. That works out to about .4 grams per pound of body weight.

This is another popular myth that persists despite the fact that women typically don’t have the amount of hormones (namely, testosterone) necessary to build huge muscles. In fact, even men struggle to gain muscle which is one reason steroids are such a popular drug with men who want to build big muscles. This myth goes hand in hand with Myth 2, convincing women that strength training is for men and that, if they do lift weights, they should stick with the pink dumbbells.

Nothing could be further from the truth. Lifting heavy weights can benefit both men and women and, in fact, challenging your body with heavy weights is the only way you’ll really see results and get stronger. [The author – who is a woman] has been lifting heavy weights for years and have never even come close to looking like a bodybuilder…most women who lift weights would agree. Remember, muscle takes up less space than fat. When you add muscle, that helps you lose fat (along with your cardio and healthy diet, of course), which means you’ll be leaner and more defined.

This next myth is probably the most common one by far. Many women think that if they lift weights they will develop big muscles and look bulky and unfeminine. Nothing can be further from the truth! The fact is, women don’t have near enough of the male hormone testosterone, and testosterone is the major growth hormone that will produce bulky muscles. Unless women use supplemental means like steroids and growth hormone, they cannot bulk up like men. Weight training will get you firm and toned but by no means will it make you look manly.

Stop me if you’ve heard this one before: “I don’t work out with weights because I’ll get huge, big muscles”. I know, yes, you’ve definitely heard that before and it’s probably the biggest misconception of all the fitness myths. Lets get this straight: no matter how many weights you lift, there is no way that you are going to get huge big muscles.

Huge big muscles are a result of years of serious weight training sessions, strict dieting and a hell of a lot of discipline. If you’re just an average Joe or Jane for that matter, simply lifting a few weights will never make you “big”. Arnold spent many years building his body to develop that Terminator physique. Don’t be fooled that pumping iron will turn you into an Arnold overnight.

A lot of women live in absolute fear of the weight room because they have been brainwashed to believe that if they want to lose weight, they need to spend hours running, cycling or rowing. They are completely unaware that working out with weights can help not only burn calories, but tone up those bodies as well.

Women think that pumping iron will develop their muscles and make them look like bodybuilders or make them look fatter. First of all, like we cleared up earlier, bodybuilders spend many years developing their physique, but apart from that women lack the testosterone levels that are necessary to build those huge, big muscles. You can weight train until you are blue in the face and not even get close to that Hulk-like physique you fear so. Once you start working out with weights, you will notice just how true this statement is.

…a recent report in The Journal of Women’s Health (originally spotted by Maspik Teruzim in Wired via Instapundit) sheds some light on the issue. Women are indeed very different from men but respond to intensive training.

Three studies are cited in the article, in particular one from The Journal of Applied Physiology. That article suggests that a woman weighing 150 lbs. and following a moderately strenuous training regimen focused on strength and endurance could gain about 2 lbs. of muscle in 6 months (or a 2% increase in muscle).

How Much Muscle Can You Gain In A Year… Really?

Researchers from the Netherlands, for example, found that men with a “solid” build gained more muscle than men with a “slender” build following a 12-week weight-training program [7].

Although fat-free mass increased in both groups, the slender guys gained only 0.7 pounds (0.3 kilograms) versus 3.5 pounds (1.6 kilograms) in the solid group.

While there are some variables that you can control, such as how you train and what you eat, there are many that you cannot. Be realistic. If you have a body designed for long-distance running, it’s unlikely that you’ll be winning the Mr. America contest in the next few years.

Enlargement or overgrowth of a muscle due to the increased size of the constituent cells. Increased training will result in an increase in the size of cells, while the number of cells stays the same.

Hypertrophy of the muscle complex has, so far, been shown to be controlled by what is known as protein turnover (the breakdown of damaged muscle proteins and creation of new and stronger ones). This process takes time. Just as the many living organisms around us in nature require time to grow, so do our muscles. In our enzymes the protein turnover rate occurs approximately every 7-10 minutes. In the liver and plasma, it’s every 10 days.

And in the hemoglobin it’s every 120 days. In the muscles, protein turnover rate occurs approximately every 180 days (6 months). This lends even more support to the observation that the turnover rate limits the natural body (of the non drug-using athlete, bodybuilder) in building muscle quickly.

The Colgan Institute of Nutritional Sciences (located in San Diego, CA) run by Dr Michael Colgan PHD, a leading sport nutritionist explains that in his extensive experience, the most muscle gain he or any of his colleagues have recorded over a year was 18 1/4 lbs. Dr Colgan goes on to state that “because of the limiting rate of turnover in the muscle cells it is impossible to grow more than an ounce of new muscle each day.”

In non-complicated, mathematical terms, this would equate to roughly 23 pounds in a year! Keep in mind that high-level athletes are the subjects of these studies.

When it comes to muscle gain there is no dramatic technique or quick fix that will allow you to pack on more muscle naturally. It’s better to stay focused and realistic by training hard, eating meticulously and spending time to recuperate properly; this will result in your achieving a more muscular physique. Keep in mind that it’s physiologically impossible to gain more than one pound of lean muscle per week.

For most weight-gainers, .5 pounds per week would be an even more realistic goal as they reach their genetic limit. Remember that gaining muscle is a long-term project and not something that can be simply turned on. If you’re dedicated and diligent in your efforts, you’ll not be disappointed!