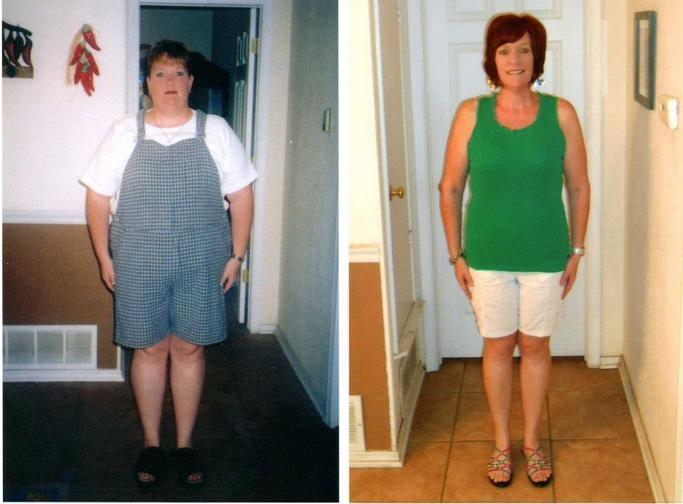 My name is Sarah and I have lost 124 pounds. I have always had a weight problem. I was a chubby kid that became an overweight teenager and ultimately became an obese adult.

My ‘Aha’ moment came in 2003 when I topped the scales at 287 pounds. I began having moments when I would stop breathing while I slept and would wake up gasping for air. These episodes were very scary to me. This was a turning point for me and I knew I had to do something to lose weight and be healthy or I was going to die. I have always wanted to lose weight for as long as I can remember. I have even made a few attempts at it but could never seem to stick with anything for long. I think my biggest issues were not knowing what to do and especially not believing in my heart that I could do it.

Along the same time I began having the not breathing episodes, I had a co- worker who told me she wanted to join Weight Watchers. She asked me to come with her to a meeting that following Saturday. I went with her to that first meeting and made the decision that I had to do whatever it took to get healthy and lose weight once and for all. In the first 10 months, with the help of Weight Watchers and exercise, I lost around 75 pounds. I was so happy and felt great to be on my way to my reaching my goals. Then the plateau stage set in. I was having a hard time losing any more weight and got discouraged. Instead of asking for help from my Weight Watchers leader or other members, I gave up and quit.

I spent the next 5 years trying to get back the same motivation I had in the beginning and push through to finish my weight loss goals. During that time, I ended up gaining back 40 pounds. In 2009, I joined Weight Watchers again, determined to lose the 40 pounds I had gained back and to get to my weight goal. It has taken me a little over 3 years of ups and downs, along with 2 foot surgeries to finish, but I finally reached my weight loss goal in August 2012.

I cannot even describe into words how wonderful it is to have achieved something so great! Just a few of the many ways that losing 124 pounds has changed my life is: I have gone from a Size 22/24 to a Size 8/10 in clothes,  I have to introduce myself (on occasion) to people that I haven’t seen in a while because they don’t recognize me, I have so much more confidence now than before and I have ran 2 5K races this past year, which is something I could have never done before. But the most rewarding thing that has happened to me is that I have become an inspiration to my friends and family to lose weight and be healthy. What a blessing that has been!! 🙂

To anyone who is struggling to lose weight, I would simply like to say that it can be done. Make a plan that will work for you and your lifestyle, stick to it, track what you are doing and remember that you are human and will make mistakes. The important thing is that you learn from those mistakes and keep pushing through to reach your goals. Believe in yourself because you can do it!!!