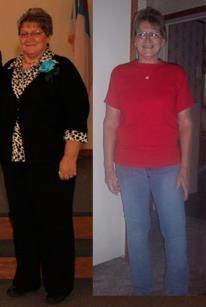 In December of 2009 I had reached my all time high of 274 pounds and I could barely move for all the pain in my body joints. I had diabetes and heart issues, gastro intestinal issues and was just plain miserable. I had no desire to do anything, go anywhere and my self esteem was at an all time low. In December of 2009 I had heard about a support group taking place at Memorial Hospital in Springfield, IL so I went not expecting much. I sat and listened to all as they talked about this surgery, then this real skinny guy, 175 pounds was telling his weight loss story and he had weighed 395 pounds and I realized it was someone I had once worked with and had no idea it was him. I was amazed and could not believe my eyes. I listened and took in every word there that anyone said. I was going to be thin. At the end of the group they asked us if we had any kind of insurance and we wrote down what we were covered by and then they talked to us one on one and I found out because of all of my health issues my insurance would indeed pay for me to have the bariatric surgery. In January 2010, I went to my first nutrition visit and on January 8th I had my last Diet Coke and any other carbonated drink and no more caffeine. I started going to psychiatric evaluations to see if I could or would become and stay compliant so that I could be healthy for this life changing surgery. I wanted this so bad, I could taste it. I knew if all these other people could do it, I could. I knew I had to have discipline and giving up my Diet Cokes and caffeine, I knew I COULD DO IT! I was turned down by the doctors the first time, they said I still needed more counseling. I was not ready yet. I owned my own restaurant at the time and my son had just gone thru a kidney transplant and things were not going so well. The doctors were worried I had too much on my plate. Finally in July of 2010 they gave me the go ahead for surgery. I was so excited, my daughter was getting married on October 15th and I could have some of the weight off by then. The only problem was their first opening for me to have surgery was on October 25, 2010, so that was it. I went to the wedding very fat, uncomfortable and miserable. So on October 25th, I went into the hospital and from that day on my life has been a complete transformation. This was not a fad diet this was a LIFE CHANGE FOREVER. I came home 3 days later and was very sick and getting used to my now “2 ounce” stomach. That was smaller than most bites I had taken in the past. On July 7th, my 53rd birthday I had reached my goal I had set for myself of 145 pounds, I had lost in 9 months, 129 pounds. It did not stop there. I kept losing weight and got down to a very unhealthy weight of 118. Now mind you, I am only 5′ 3″ tall and before I weighed 274, wore a size 26 jeans and a 3X shirt. I went to the bariatric team and they got me started on Boost and Ensure to help bring my weight back up. Finally on Labor Day in September I was at a healthy 131 pounds and I have held between 130 and 135 for 15 months. I now wear a size 5 jeans and a size small shirt. I have more energy, I look good, I feel great and I have more self esteem than I have ever had in my entire life. I am happy, healthy and I am loving every day of life. I have 4 beautiful grandchildren and now I know I am going to grow old to see them grow up. The surgery was not all smiles and greatness, but it was the best thing I have ever done for myself and I know it is a forever change for me. I have gone from taking 17 medications to 2. Now how many people can say that!
Source: iReports
Post Views: 1,219