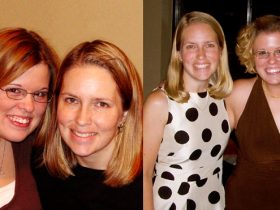 Hello Fit Nation,      My name is Sheri Harkness.    I am a 44-year-old full time working, single mother of two fantastic sons ages 12 and 17.    In March of 2008 I went in for a routine physical.    When the nurse told me I weighed 282 lbs. my first thought was, “Wow, thank God I don’t weigh 300 lbs.!”    I knew then and there that there was something wrong with my thinking.         In 1994 I moved to New Jersey from California and married my boy’s father.    It was a troubled marriage.    I lost my beautiful mother at the young age of 54 to pancreatic cancer.    Through it all I found comfort in food.    I ate like a high school kid whose parents were out of town for the weekend!    I had absolutely no regard for my health.    I ate whatever I wanted and however much I wanted.    I ate anything from triple cheeseburgers to loaded sub sandwiches to donuts and cheesecakes.    But I made sure every day I drank two 2 liters of soda a day!      I was addicted to soda and as a result had a tremendous amount of inflammation and my blood pressure was high.         I decided that while it seemed as though I could not control the bad things that were happening in my life, I could control my health.    So I decided that I would quietly go on a personal journey….to feel better.    I told no one of my intentions.    I did not want to meet anyone else’s expectations but my own.    I joined my local YMCA and with the help of my sister (a personal trainer in CA) I began working out three days a week.    Against my sister’s advice I followed a diet that made sense to me in the beginning.    I knew I had a lot of weight to lose and did not want to create an early plateau by eating healthy right from the get go.    So, I still ate all of the high calorie, full fat foods I loved; only I cut my portions in half.    The only complete omissions I made in the beginning were that I cut the added table salt and stopped drinking soda all together.    I began losing weight on a constant basis.    When I even sensed a possibility of a plateau I made small changes.    I incorporated lean chicken and salads and increased my workouts by five minutes.         I have participated in 5K’s, mountain hikes and was selected to participate in the Empire State Run Up Race in New York!    That race totaled 1,572 stairs that covered 86 floors.    I finished in 22 minutes!    When I got to the top I could feel the tears run down my fa