Weight Loss Success Stories: I Slimmed Down 50 Pounds And Went From A Size 16 to 6 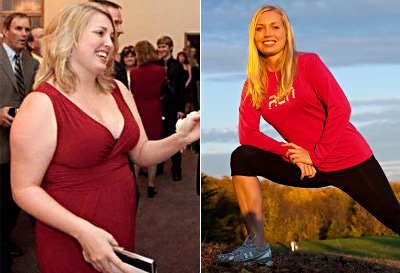 A bride from Maryland resolved to lose weight before her wedding day. She overhauled her diet and went from a size-16 to a size-6

As a teen growing up in Silver Spring, Maryland, Kristen Collins Eccleston regularly dined on greasy fast food with her friends. After college she met her now husband, Bryan, and got into the habit of splitting extra-large pizzas with him and ordering buffalo wings for Sunday-night football. Their junk-food feasts caused Kristen to tip the scale at 180 pounds. When Bryan proposed in 2009, it was a wake-up call for the 25-year-old special-ed teacher, who vowed to shed weight from her 5’6″ frame before getting hitched.

Transform your body in time for spring

While shopping for size-16 wedding gowns in February 2010, Kristen’s mom sensed her daughter’s misery. She sent Kristen an encouraging note, pledging her support and offering to buy her a new smaller-size outfit for the rehearsal dinner. “My mom wanted to see me happy, so she motivated me to do something about my weight,” says Kristen. “She told me to do it as a wedding gift to myself.”

RELATED:   Weight Loss Success Stories: Ramani Loses 65 Pounds And Gets Her Body Back

Kristen trimmed her portions and added more lean protein, veggies, and fiber-rich whole grains to her meals. Bryan joined her for daily after-dinner walks, and by May 2010, one month into her shape-up, Kristen’s clothes felt looser. Then Bryan suggested jogging their usual one-mile route, and for added incentive they signed up for a 5-K. Kristen increased her evening runs by half-mile increments, and she finished her first race bursting with pride. She immediately signed up for another and ran one or two a month until her November nuptials. A month before the big day, she was fitting into size-6 clothes.

Before her slim-down, Kristen avoided cameras. But she enjoyed posing for her wedding photos and even rocked a two-piece swimsuit on her honeymoon, sans cover-up. “Now I want everyone to see me,” she says. “I have the confidence I’d always wanted.”

Stay competitive. “Trying to keep up with my fiance pushed me and kept me from skipping workouts. I didn’t want him to outdo me.”

Take two. “Vow to stick with a new routine for just two weeks. After that it becomes a habit you don’t even think about.”

Forget fads. “Diets never worked for me because I felt deprived. I had to learn to eat mostly whole foods in moderation.”