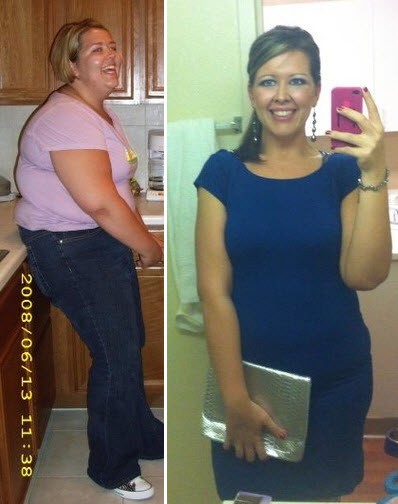 My name is Sarah Cutting. I am 27 years old and for the last 26 1/2 years of my life, I was always known as the happy, funny, crazy “fat friend”, a title which I was slowly becoming comfortable with. Having been overweight the majority of my life, I had resigned myself to the fact that it would probably always be this way for me. I told myself “It’s your genetics” and “It’s too hard to change this” and other ridiculous lies. I honestly felt that the situation was completely out of my control and irreversible.

I love food. I have always loved food. There is a certain picture of me that comes to mind from when I was about 3 or 4 years old. The picture shows me sitting on the kitchen table at my grandmother’s house holding a pot of mashed potatoes and eating directly from the pot with a wooden spoon. As the years passed, food became an obsession. It became a comfort. It became my friend and saw me through every trial and tribulation, ever laugh and moment of genuine happiness. It was my everything.

Because of my unhealthy obsession, I spent every year of my tween and teen years overweight and wishing there was something I could do about it. As a teenager, it’s hard to commit to such a drastic lifestyle change, so suffice it to say, it didn’t work out so well. I graduated high school shopping in the plus size sections of stores and never left those sections. College wasn’t much of a change. Late night binges on food and booze, parties to see who could drink more, lack of sleep, stress of nursing school – my weight continued to creep up and up and up. I never let myself step on a scale because I was too afraid to see the numbers. If I had to guess though, I probably weighed around 300 pounds by the time I graduated college and started my nursing career. It was the heaviest I had ever been in my life.

In September of 2009, I lost my father. He died suddenly of a massive heart attack. My father was overweight and had a extensive cardiac history that contributed to his heart attack. He was 48 years old. I was 24 at the time. That was the first time that I realized how short life can be and how if I kept on the path that I was on, I didn’t have a whole lot of living left to do. But unfortunately, at that moment in time, I was not ready to commit to getting healthy. So I continued on my self-destructive lifestyle.

February 2012 changed my LIFE. I had lost a little bit of weight in the 4 years between college and now, weighing in at 267 pounds. I knew that it was time for a change, I just didn’t know how to do it. I had tried before, but could never commit to a long-term lifestyle change. I began talking with one of the nurse practitioners that I worked with and learned that she had recently become a vegan after seeing what it had done for her parent’s health. She continued to tell me all the benefits of adopting a plant-based diet. She had always been concerned about me after my father’s death, knowing that I was headed for the same untimely end. It sounded crazy at first, radical even. But she gave me a few pointers and told me to think about it. I thought long and hard, read some books about vegan and plant-based diets, and decided that this was the thing that was going to change my life.

RELATED:   Weight Loss Before and After: Debbie Commits To Exercising And Loses 182 Pounds

It’s December 2012, and I currently weigh 176 pounds. I have lost 91 pounds since February of this year! I am the healthiest and the happiest that I have ever been in my entire life. I can’t believe that my life has changed this much in the past year. I never thought it possible. People have started telling me that I have become their inspiration to lose weight and reclaim their life and health. Being told that I am a inspiration scares me, but it also keeps me going and stops me from giving up this new life that I have adopted. This isn’t a diet, it is a completely new lifestyle. And it’s a lifestyle that I will never give up!  Source: iReports

Related ItemsOver 90 Pounds Lostplant based dietSEOveganvegetarian
← Previous Story 118 Pounds Lost: I lost more than just my Dad.
Next Story → Before And After: Den-Ray Lost More Than 170 Pounds Without Surgery