Weight Loss Before and After: I Lost 93 Pounds In A Complete Body Transformation 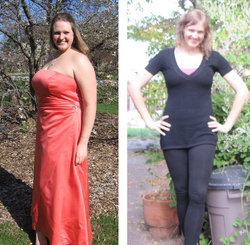 Over the years Leelyn1216 had allowed her weight and diet to get out of hand and she knew that her health was suffering as a result.  Inspired by her mom, she set personal goals and was determined to make this lifestyle change a priority.  She has lost 93 lbs and with 7 lbs to go to – we know she’ll succeed!

I was very unhappy with myself. After struggling with the family monster of impulsive overeating for years, I was now 22, a new college graduate, and my weight had peaked at 258 pounds. It seemed like the longer I let myself continue as I was, the more I spun out of control in a lot of areas of my life. My mom had hit her peak weight of 316 pounds and, fearing for her health, had started exercising like crazy to get it off. Even though I live 1200 miles away from her, she had still been my excuse — “Well, I may weigh this much, but my mom still weighs more!”– and suddenly, she was encroaching on me. I hadn’t thought she’d really do it, and now we were only 30 pounds apart. I started to fully realize how far I’d fallen, feeling it in my joints and overall lethargy. I’ve had two hip surgeries; I knew that weight could only be wearing on my overall health. A frustrated desperation overtook me, and instead of sitting and working on my computer when I got home from my part-time job, I went for a walk.

My mom and I had joined a women’s circuit-training club, but that ended for me when I moved away to go to school. My sophomore year of college, a membership to the Y was included in my tuition, and we worked out three days a week as a class. But… it was at 6:30a.m. (not my favorite hour), and my heart was hardly in it. The most I could say at the end of that year was that I had “only” gained three pounds according to the doctor’s office scale. I still found physical activity overwhelming, and even found myself in tears when some friends did a high ropes course and I couldn’t participate. Hiking left me in their dust. I dropped a couple pounds before graduation just by adding occasional exercise. But it just wasn’t consistent enough, and it was way too easy to excuse it away — “I’m too tired,” or “I have too much homework.” Why couldn’t I get a handle on this?

It took about 20 pounds before I finally realized I was sticking with this, and that’s when I called my mom to tell her that I was joining her on her drastic “weigh down.” It was time to, as my mom put it, “do just one thing differently.” So it became a sort of sisterhood. As we attacked our personal goals with serious determination, we could talk to each other about the healthy choices we were learning to make. It was a new kind of openness and accountability– one that I desperately needed.

I started strictly limiting my calorie intake, aiming for 1200-1500 calories in a day. To keep that goal, I cut out liquid calories, realizing that I would rather eat than drink my nutrients. I also drank a lot of tea, ate a ton of fruits and veggies, and set goals for myself about how many calories I should have had by a certain point in the day. I didn’t cut out my favorites– like ice cream and chocolate– but I did think more than twice before I ate them, and I started making allowances on the days I knew I was going to splurge. I went to the gym for 2-3 hours every day, doing plenty of cardio as well as some weight lifting, basic calisthenics, and flexibility exercises. Probably the most important change for me, however, was realizing that everything I did was a trade. I could trade 1/10 of a pound lost for eating that candy bar. I could trade a workout and burning more calories for that nap. If I wanted to see results, I had to make a healthy lifestyle a priority: I could trade in the lethargy for energy, and my fatalistic self-image for one that was so much better.

RELATED:   How I Lost 160 Pounds: David Sheds The Weight With The Help Of A Fitness Celebrity

I only joined Calorie Count this October, but I’ve been using it for more than a year as I tracked my calorie intake in a spreadsheet. I’ve loved having all of the nutritional information for so many foods at my fingertips. It’s been a huge help in learning the kinds of choices and substitutions I can make, helping me be honest with both my record-keeping and myself. Besides… it’s fun! I joined now to help me maintain– and hopefully get the last seven pounds off so I can say I’ve reached my ultimate goal: losing 100 pounds.

Probably my own self-doubt. I’d tried so many things before, and even succeeded in losing 25 pounds in high school at one point. But it always came back, leaving me right where I started. I wasn’t sure I could actually stick with anything long enough for it to change me and become a true lifestyle instead of just a rule to attempt to live by until I broke it. With that track record? Sometimes going to the gym was a mindset difficulty.

I dropped almost fifteen pounds in the first month when I really started regularly counting calories and walking, which eventually increased to jogging and doing the elliptical when I joined the gym. And I suddenly felt so much healthier! I had more energy and the conscious knowledge that I was doing something that was really, really good for me. That’s when I realized– there’s absolutely nothing more motivating than seeing results and knowing you’re making your own personal goals. That’s what kept me heading back to the gym almost every day. Now, I’ve lost 93 pounds, and my mom’s lost 115. I’m six feet tall, so I’m now at a healthy weight for me. And there’s no way I’m going back!

It’s taken a while for the image I see in the mirror to match the “me” other people perceive. I loved knowing I’d met my initial goals on the scale, and I loved wearing these healthy new sizes and more chic styles. But I still didn’t look that different to myself. I was explaining to a new friend how much I’d struggled with my weight, and she gave me such a puzzled expression. “But you’re THIN,” she emphasized. “If you lost more, where would it come off of?” “Thin” is not a word I ever thought I’d hear applied to me. Granted, I know my body, and I know I can stand to lose this last seven pounds without being unhealthy. But for me, realizing that I’d reached a healthy weight and that others would no longer see me as heavy was a huge revelation and a huge victory point. And going hiking with my friends this summer? I was now in the middle or the front of the group as we trekked through the mountains instead of bringing up the rear a mile behind. The determination and perseverance? So, so worth it!

RELATED:   Before and After PCOS - Britt’s 53 Pound Weight Loss Journey

I’m still counting! And I’m really only just now entering the maintenance phase of this, trying to tone my muscles and build my strength and endurance more than actually losing weight. Thankfully, this change in lifestyle has been going on over the last year or so, and that’s long enough to build some positive habits and “addictions.” For instance, working out is totally a part of my everyday routine. And I look forward to it as being one of the best parts.

For the first time in my life, I feel my age instead of like someone two decades older. I’m less clumsy, I feel prettier, and others treat me better– mostly probably because I treat myself better. I hadn’t realized how many of my insecurities stemmed from my weight and negative self-image. I love buying smaller clothes and wearing skirts and heels. I love knowing I’m helping my body work for me longer and better– and feeling like my weight now more accurately represents who I am to people who don’t know me. I also set higher goals and expect more from myself. My goal now? I want to climb Pikes Peak. I think I’m physically capable, so I’m training toward it for next summer. It’s going to happen!