“My Body is Stronger and Tighter Than Ever Before” 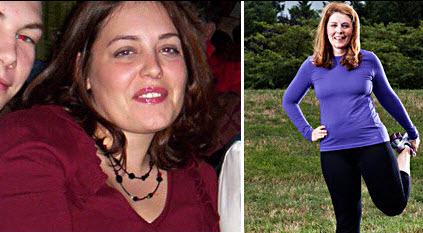 Quitting her job and going back to school gave Andrea Vandiver the fresh start she needed to regain her college-body.

When Andrea Vandiver graduated from Maryland’s Salisbury University in 2004, she was a healthy size 8. But then a job as a sales rep kept her on the road, which meant most of her meals came from drive-thrus. “I ate out constantly and munched on whatever was served at business meetings,” says Andrea, now 29.

A few months later, Andrea quit her sales job and enrolled at Towson University in Baltimore to pursue a teaching degree. Moving gave her the perfect opportunity for a fresh start. “My weight was out of control,” she says. “This was the excuse I needed to get back on track.”

RELATED:   How I Lost 123 Pounds: Rich's Transformation From Fat To Fit

Cutting carbs jump-started Andrea’s weight loss. “I literally dreamed about cake, but after a few weeks I stopped having cravings,” she says. She lost 12 pounds in a month, then slowly added whole grains back into her diet. She also began eating breakfast daily (something she’d never done before). Too self- conscious to join a gym, Andrea used fitness DVDs and weights at home, and in March 2007, she signed up for a program that trains beginners to run a 5-K. When she completed the race that October, she was 65 pounds lighter and “incredibly happy.”

Andrea now has the energy to keep up with the third-graders she teaches…and enough left over to train for a half marathon. She also enjoys how having a trimmer figure means she can now swap outfits with her friends. “I’m fitting into clothes I wore in college!” she says.

Don’t stress about the scale. “I try on an old pair of jeans once in a while. If they fit, I’m doing OK!”

Bring your pre-game. “I’ll have a healthy snack like peanut butter and jelly on whole-wheat bread before going to happy hour so that I won’t overdo it.”