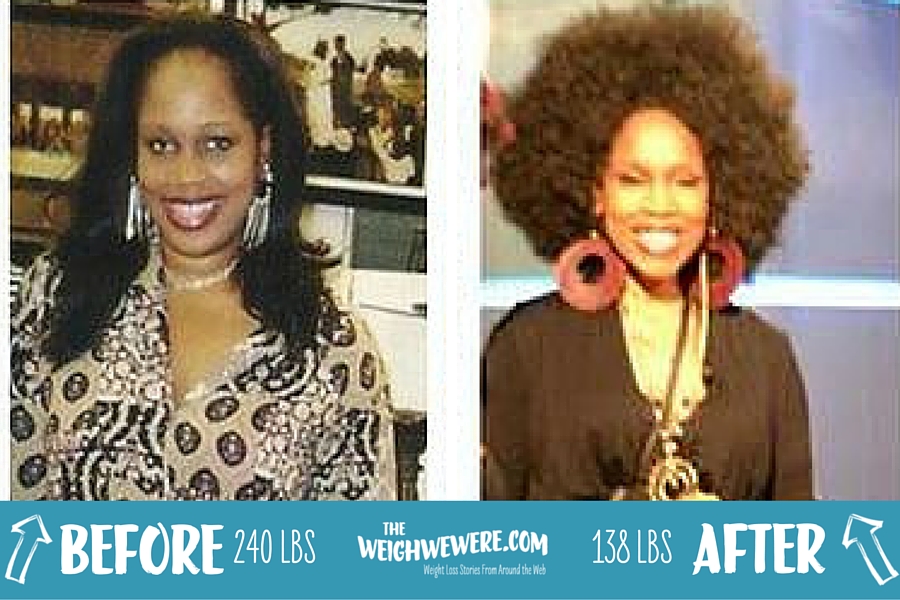 I simply needed more energy. That’s how it all started. My life had spiraled out of control. I had just had my 6th child and was weighing in at 240 pounds. Because I am 5″ 10’ most people did not know I weighed so much. I was able to camouflage under size 18 clothing.

Although people did not know I was 240 pounds my joints did. The pain screamed I was overweight. I was often passed exhausted. Since I was so tired all the time from an auto-immune disease called Sarcoidoses I just gave in to the fact that I would just die this way, tired and fat.

Doctors had told me that auto-immune diseases make people feel tired all the time. Everything I read on autoimmune diseases said they suck the life out of you. It was true. Even if you slept for 20 hours and wake up you would feel as though you had never slept and just want to sleep again. That was no way to live.

I quickly realized that life was passing me by. I could not go to the office because I was very unproductive. When you do not have energy then depression sets in because you know you are supposed to be doing something more but simply do not have the energy to do it.

I felt really badly for my children because they had a Mommy who could do nothing for them. I was the couch potato mom – just sitting on the couch ordering them to do every single thing. If I could vacuum just one room back then it would have been a big celebration. I used to have to muster all the energy I had just to get to the bathroom to take a bath. My bedroom and bathroom had become my oasis. Till this day people wonder how I keep such an immaculate bedroom. It’s all because that’s where I lived for so long. At one point during that time, all I could do was pray.

Since I could no longer go to the office and sell Real Estate, my husband and I began looking at other opportunities for me to work on that I liked and would be able to handle. That’s when I met the most unsuspecting new friend Mr. Joe. I called Mr. Joe for a reference on a franchise we were considering at the time. Then we began to talk. He shared with me that he had cancer. I sympathized and he quickly admonished me not to. He said “Hey, I feel pretty good for a guy with Cancer. I take the most phenomenal health products and I have energy to boot!” Energy? I asked him. I was so depleted of energy at that time that I became obsessed with how to get some. To be honest at that time, if someone had told me to bend over and lick the concrete to get an hour of energy you would have seen my butt up in the air. I was desperate.

My new friend Mr. Joe went on to tell my about a product he’d been using to get the energy. He agreed to send me a case to try and see if I liked it. Since he asked for no money and I was always a believer in fate I decided to take him up on his offer.

The products came and I was anxious to try them. Surprisingly they tasted really good. I had heard a lot about the Acai berry but you know people can become insensitive to advertisements because so many things are a gimmick and I was one of them. Very skeptical. But since he wasn’t selling anything and I was desperate I had absolutely nothing to lose.

Well to my surprise when I took the product the first day my eyes popped wide open. My husband came from work to discover that I had not only vacuumed but the entire house was spotless. Dinner was fully cooked and ready and I even put make up on. My husband was so silly, he walked out the house, rung the doorbell, then came back in asking was he in the right house.

I say I lost weight accidentally because I took the Nzuri Vida product just to have more energy to get through the day. Then about a month later, I noticed my pants were noticeably loose. I didn’t pay it much attention until 3 months later they were falling down! I will kid you not my pants were falling down. My life had totally transformed. I was back to my pre-diagnosed self. In just 6 months I had gone from a size 18 to a size 10. I did nothing different. My appetite was simply in check!

I checked with others who were consuming the product. Although it’s not marketed for weight loss I found the secret to it was the amount you take daily. It seems that 5 to 6 ounces was the weight loss amount needed. Although the label says 1 to 3 ounces daily.

Now what I found most strange was although I had trimmed down, I still had my old eating and buying habits. I would drive to the fast food line to get my usual number 1 but leave with a salad! It was a strange phenomenon. I would see fruits and vegetables and salivate like a vampire would for blood. It occurred to me that the body was very intelligent and only craved what it needed naturally once it was properly nourished. I then realized that unusual sweet and salt cravings came from mineral and vitamin deficiencies.

I mean I am in no way a scientist or nutritionist but I do have common sense. I became fascinated with Super Fruits from the Amazon rainforest. It was the Acai and Yerba Mate or was it the Acai and Cupucua? I had never even heard of Cupucua. Couldn’t pronounce it. But I did research it and found it is huge in South America. The regions who eat these super fruits have almost none of the diseases that most Americans have. That alone was amazing to me.

I then went and tried to make my own concoctions thinking I’d save money but I could never get the same boost. I tried the cheaper Acai at the local super market but they’re normally loaded with sugar and never did the trick either. Also, raw they’re not that tasty. I’ve tried all sorts of Acai’s from various online places; there is none that compares to the NzuriVida.

I’ve gone on the news, Fox, Channel 2 and other news to share the good news of my weight loss and wellness. What’s most important is that it was hidden in plain sight. Just think about it, the God who created the heavens and earth gave us everything we need to not only survive but to thrive right here in the earth. We are walking on it.

Now I can lose weight anytime I want. I do not have willpower. So I use the Nzuri Vida for willpower in a bottle. Then if I gain a few pounds I simply juice it a lot. I will add the Nzuri Vida to my bullet. It’s great to use smoothies to keep your weight down. I think of the Magic Bullet as a version of a crock pot. Put everything in one container and voila – you’ve got a full meal!

My favorite smoothies are green smoothies and fruit smoothies. I just add the Nzuri Vida to any smoothie I drink and I keep my weight in check. I would also recommend to people to drink green tea and preferably yerba mate tea. They go a long way to do the body good.

I now wear a size 8. I went to a size 6 but it was too small for me. I weighed in at 138 pounds. It was too thin because when I sat in the bathtub my bones would pain me. Or when I slept on my side I would have to put a pillow between my knees so my bones would not rub together. The size 8 seems to be perfect for me.

So I want to encourage you all that you can stay thin and trim if you learn to use super fruits, learn to make smoothies and learn to use your crock pots. Crock pots are great. You can add skinless chicken, low sodium tomato sauce, spinach, chopped onions and you’ve got a great low fat healthy meal that will feel you up. The goal is to never get too hungry.

If you snack a few times a day on healthy food you are tricking your body to not to store food for fat. I was angry that I had spent thousands of dollars on all the weight loss gimmicks. All I needed was the proper vitamin balance in my body and then my body naturally craved better foods. I now have the mental clarity, focus and strength to do what I need to do.

You can find the Nzuri Vida 10 in 1 Total Body Restoration Tonic on Amazon. It truly is a life changing. It has been over 7 years and the fat never came back.  That’s what I’m most happy about.