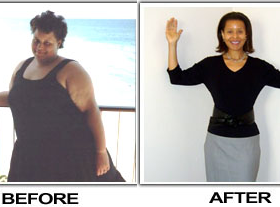 Before And After: Alicia Lost An Amazing 175 Pounds By Diet And Exercise

Krista tells how they gained it: Basically, I’ve struggled since college with my weight. It started with the Freshman 15. Once I had Collin, there were the challenges of being a single parent, raising an infant, trying to work, going to graduate school — and things spiraled into doing everything as quickly as I could, meals included. We got into the bad habit in the past few years of eating fast food, store-bought food, take-out foods — it was a lot of “hurry up and get dinner” so we could do homework and everything else. There was always something else, and our weights quickly got out of control — we were eating out most meals every week in order to save time. We just needed to stop and think about what we were doing.

Breaking point: The doctor told us both together, with very little subtlety, that we needed to do something right away. Collin’s weight was increasing rapidly, and the doctor said this was not OK. So we joined a gym, and we were gung-ho at first. But it faded out because we didn’t have time. Then another year slipped by, and we went back to the doctor, who said we needed to make radical changes right away. At the same time, a very close co-worker of mine shared her concerns — I’d been having a lot of migraines and was sick a lot, and she asked if my weight might have something to do with it.

The weight was just coming on so fast, and I think I was waiting for someone to call me on it. I had a lot of guilt about what was happening to Collin — he was just eating what I told him to eat, and I really felt responsible for that. I was at my wit’s end. One night, I went online and typed in “fat camp,” and Wellspring Camps came up. It’s kind of an anti-fat camp, really, and I liked the approach. I collected more information, I talked to someone about the program, then I signed up. I was determined to do it without considering the initial impact at that time — it was that important.

How they lost it: We did the family camp option at Wellspring inPinehurst,N.C., where each child is accompanied by an adult. We stayed for two weeks in an amazing resort, which exceeded my expectations and needs. There were a lot of family activities, but we were separated a lot — the kids had classes, behavioral counseling, coaching and exercise, while the parents attended seminars on the science behind Wellspring, obesity, genetics, how our bodies react to putting on and taking off weight, stress management and more. We also went kayaking, swimming, hiking, and we took two-mile walks every day. We completely immersed ourselves in what we were doing — we didn’t bring food from home, we stayed on their plan, and we left with a contract so we could be successful at home.

Our contract states that we’ll take five to seven walks a week, we’ll log 10,000 steps on the pedometer five out of seven days, we won’t eat in front of the TV (ever!), we’ll journal our food intake six out of seven days, and Collin can choose a reward if he hits his goals for the week (a movie, putt-putt golf, bowling, but no food rewards).

What’s great about Wellspring is that they don’t just tell you how to do something, they show you how to do it. We took a field trip to a grocery store and had to find substitutes for our favorite foods. It was an empowering experience. We ate a lot of Ben & Jerry’s, and now we eat Haagen-Dazs chocolate low-fat sorbet, with less than 2 grams of fat for the whole pint. And Collin has a great and wondrous new snack he’d like to share with other kids (see recipe below).

We came home from Wellspring on a Saturday night, and on Sunday morning, we purged our kitchen and donated foods to a local food bank. Instead of junk, we keep low-fat snacks on hand — pretzels, fruits and veggies, Special K bars (Collin is a huge fan of the strawberry bars). Collin even took his own snacks to summer camp, because he refused to eat what they provided. He has changed so completely since he’s lost weight. He’s personally empowered to look at foods and make decisions about what he wants to do and doesn’t want to do. And I’ve made our house a completely safe place — there’s is nothing there he can’t have.

Krista and Collin have been consistently losing weight since they returned home from camp. They keep setting small goals. When they reach a goal, they set another. “We’re getting there, we’re not perfect yet,” says Krista. “But I am so happy we went to the camp — we are doing much better than if we tried to do it ourselves.”