Mom and Daughter Shed 100 Pounds Together 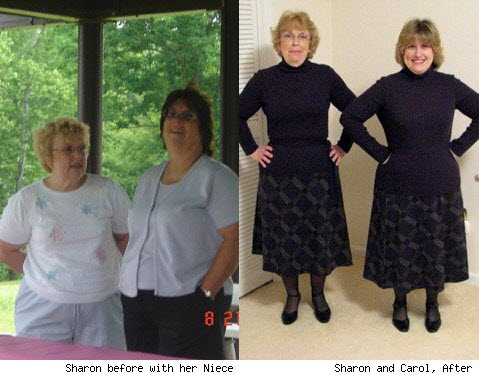 How We Gained It: (Sharon) I gained my weight merely due to the fact that I was working a full-time job as well as taking care of a large house and I was so busy taking care of everybody else that I did not think of myself. I had never been told how important exercise was to my life.

(Carol) I gained it mainly because my self-esteem had gotten so low due to a relationship breakup. I would come in from work and just sit on the couch and watch television because I was so depressed. I just felt as if I could get to any size that I wanted because no one cared.

Breaking Points: (Sharon) I had gone to our family reunion and after I saw the pictures I really realized how large I was. I actually looked as if I was six months pregnant. I was already at the point that I truly hated myself and I really dreaded getting dressed because nothing looked good on me — I was happiest in my nightgown. My husband had been begging me to lose weight for quite some time, but I always made excuses until one day I went to my family doctor told me I could die at an early age if I didn’t slim down. At that point I made up my mind to do something about it. I have two grandchildren I want to see grow up so I had to tackle the problem.

(Carol) I also saw pictures of myself that made me realized how large I had become. But the real breaking point was having chest pains at the age of 37, as well as severe knee pain in both knees. I went to my family doctor for an EKG — everything was okay, but he told me I really needed to lose weight. And I realized that no matter what kind of clothing I bought, nothing looked good on me.

How We Lost It: (Sharon) I lost the weight by first joining the Jenny Craig program — they began to teach me how to stay within a 1,200-calorie diet. I also started exercising my butt off (literally!) and I am at the point now where I really enjoy it. I used to hate helping my husband with the yard work or walking around the neighborhood, but now I enjoy both. My husband has been a great inspiration for me — he’s really proud of me. I feel like a whole new person.

(Carol) I also lost the weight by joining the Jenny Craig program.They also emphasized how important exercise is, so I immediately started really working out. It’s really exciting to see the weight come off and now I no longer have to wear size 18 clothing. These days, I really look forward to shopping and making myself look nice because I no longer feel like a fat slob.

Sharonhas been maintaining her weight for a month, and Carol’s kept it off for over a year now.