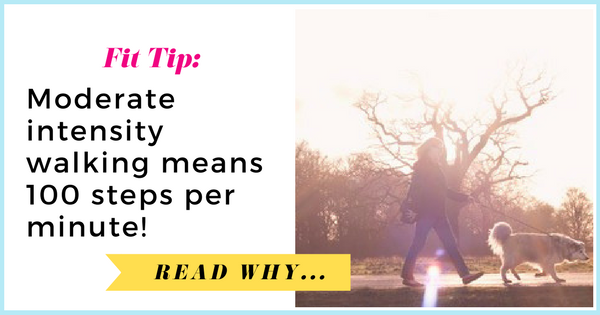 It is recommended that people engage in 30 minutes of moderate intensity physical activity daily, 5 times a week. Pedometers, widely used as a monitoring tool, are unable to measure activity intensity. Researchers have determined that a rate of at least 100 steps/minute achieves moderate intensity activity.

Researchers have determined that a rate of at least 100 steps per minute achieves moderate intensity activity.

Therefore a simple pedometer-based recommendation of 3000 steps in 30 minutes can get people started on a meaningful exercise program. The study is published in the May 2009 issue of the American Journal of Preventive Medicine.

While being monitored for oxygen uptake during walking on a treadmill, 58 woman and 39 men completed 4 6-minute sessions at different treadmill speeds between 65 and 110 meters per minute. All wore pedometers and their heart rates were recorded. Using 3 METs, or metabolic equivalents, as the minimum level of oxygen demand which approximates moderate exercise, participants were monitored to determine whether they had reached the moderate-exercise level at a given treadmill speed. From these data, the researchers found that for men, step counts associated with walking at 3 METs were between 92 and 102 steps per minute. For women, the range was between 91 and 115 steps per minute.

Although a main finding of this study is that considerable error exists when using pedometer step counts to measure METs during treadmill walking, with only 50%&#821160;% of individuals correctly classified as walking at moderate intensity using step rate alone, the authors suggest that the pedometer can be used as a simple technique for anyone trying to meet exercise guidelines.

Lead investigator Simon J. Marshall, PhD, School of Exercise and Nutritional Sciences, San Diego State University, states, “We believe that these data support a general recommendation of walking at more than 100 steps per minute on level terrain to meet the minimum of the moderate-intensity guideline. Because health benefits can be achieved with bouts of exercise lasting at least 10 minutes, a useful starting point is to try and accumulate 1000 steps in 10 minutes, before building up to 3000 steps in 30 minutes.

Individuals can monitor their progress using a simple pedometer and a wristwatch. The use of a single and simple pedometer-based guideline that is easy both to remember and measure may be more effective in a health communication strategy than the promotion of multiple guidelines and, therefore, messages.”