Men Before And After Weight Loss: Michael Took Control and Lost 386 Pounds 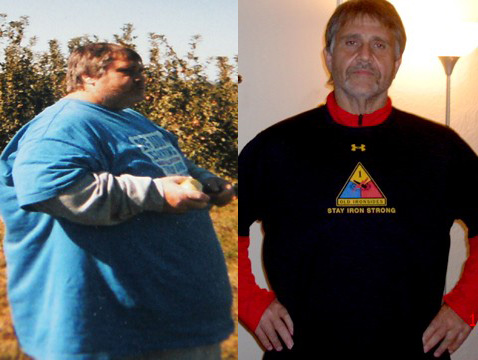 How I Gained It: Well, that’s the million-dollar question, isn’t it? For me, there was no rhyme or reason to why I became nearly 600 pounds — but there were a lot of the things that caused it to happen and some of these things can still happen today. Over my journey, I’ve learned that I am an emotional eater, and I have a tendency to punish myself for things I can’t control, which adds to this. I was depressed, and I often felt that only food could help. Plus, there’s the fact that I often ate enough to feed four people in one sitting, and the more I ate, the more it took to fill me up.

But in the end, I had a hard time blaming myself for what I had become — I wanted to believe that others were the reason behind it.

Breaking Point: My breaking point was not being able to breathe, wearing size 76 pants and not being able to fit in our car. I wish I could say it was for my kids, but that would be a lie. While I would die for my girls, they can’t be my only reason for living, because if you depend on anything but yourself to motivate you, you could end up with another excuse to quit.

Being overweight and depressed was a living hell. If anyone thinks that overweight people want to be this way, they are grossly mistaken. When you’re overweight, you can’t walk five feet, you can’t fit into your clothes, you’re ridiculed constantly and so on. Overweight people don’t want to be this way — it’s like any other addiction in that we just can’t control it. But it’s also just like any other addiction in that you have to want to solve it. If you don’t, you’ll likely die unhappy.

In the end, it was a decision — I just decided that enough was enough and I was not going to die like this.

How I Lost It: My weight went up and down for years, and at one point, I had managed to lose nearly 200 pounds to reach 400. However, the number on the scale slowly crept back up, and once I got close to reaching 450 again, I knew I had to get serious. My weight loss journey really began when I joined the YMCA gym in my area and hired a personal trainer, Chip. I was 441 pounds at the time. If I had not met him and received his guidance, I’m sure I would not be where I am today, although he will never take credit — he knows he just showed me the tools and I did the hard work. Right from the start, Chip gave me no sympathy. I’m sure he cared, but he wanted to see what I was made of. But now he treats me like a friend — he even works out with me on his free time. That’s someone who truly cares, and it’s made all the different.

I work out at least two hours a day (except Sundays), and I do many different exercises throughout the week. Sometimes I run or walk, sometimes I do weights, and usually, I mix up the two. My trainer gives me many different ideas, and I go with it.

After suffering from depression for years, I finally feel like I’ve mastered my emotional eating, and without a doubt this has been the key to my success. Simply put, I will never ever will allow something or someone to have control over my life — because in the past, this has just lead to me eating. I’m in control now.

RELATED:   Weight Loss Before and After: Jessica Sheds 20 Pounds After Losing Her Mother

As for my eating habits, I received the best advice I have ever received from one of the other trainers at the YMCA. He told me to mix up the carbs, protein, and fat in my food. I aim for 38 percent carbs, 35 percent protein and 20 percent fat, and it has worked. These days, my go-to foods are usually high-protein things like low-fat peanut butter, chicken, tuna, steak and pork. I don’t drink any soda, and I always get lots of water. I also stay away from beer and “empty calorie” foods like popcorn and fast food.

In the end, though, I couldn’t have done it without my wife, who’s stuck by me for 20 years through it all. I developed some very bad habits that were directly linked to my weight and depression problems, and she was right there by my side through good and bad. She always wanted to hold my hand and kiss me in public, even when I was at my heaviest. She loved me unconditionally. At 150 pounds, she has never struggled with her weight, but she was the one who encouraged me to join the gym. I can’t thank her enough.

If you’re struggling with your weight, I’d like to share a quote from “The Shawshank Redemption” that’s helped me stay motivated: “Get busy living or get busy dying.”

Michael’s now just a few pounds short of his goal weight of 200 pounds. He’s lost nearly 200 pounds in a year and a half.