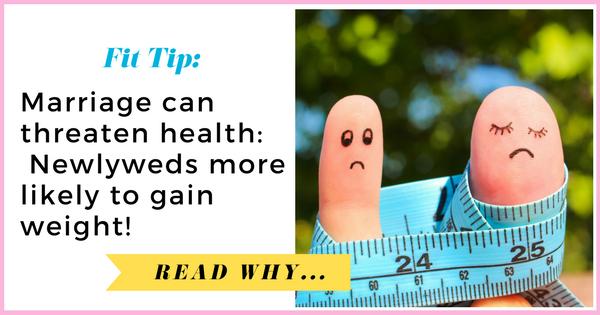 On average, young newlyweds who are satisfied with their marriage gain weight in the early years after they exchange vows, putting them at increased risk for various health problems related to being overweight.

That is the finding of a new study on marital satisfaction and weight gain, according to psychologist Andrea L. Meltzer, lead researcher and an assistant professor at Southern Methodist University in Dallas.

The study’s researchers said the findings challenge the long-held notion that quality relationships are always beneficial to one’s health. Instead, they said, the findings suggest that spouses who are satisfied in the marriage are less motivated to attract an alternative mate. As a result, satisfied spouses relax efforts to maintain their weight.

The study was based on data from 169 first-married newlywed couples whose marital satisfaction and weight were tracked over the course of four years.

Previous research also has demonstrated that marital satisfaction is associated with health maintenance behaviors, she said.

“For example, studies have found that satisfied couples are more likely to take medications on time and schedule annual physicals,” Meltzer said. “Yet the role of marital satisfaction and actual health is less clear.”

Meltzer set out to examine the association between marital satisfaction and changes in weight over time.

For four years, the newlyweds reported twice a year on their marital satisfaction and steps toward divorce. They also reported their height and weight, which was used to calculate their body mass indices.

Focus on maintaining weight is more about appearance than health?

Spouses who were less happy in their marriage were more likely to consider leaving their partner, Meltzer said, and on average gained less weight over time.

“So these findings suggest that people perhaps are thinking about their weight in terms of appearance rather than health,” she said.

The study suggests young couples should be educated and encouraged to think about their weight as a factor of maintaining their health.

“We know that weight gain can be associated with a variety of negative health consequences, for example diabetes and cardiovascular disease,” Meltzer said. “By focusing more on weight in terms of health implications as opposed to appearance implications, satisfied couples may be able to avoid potentially unhealthy weight gain over time in their marriages.”

Related Items
← Previous Story Certain probiotics could help women lose weight
Next Story → You are what you app: Choice of smartphone applications define your computing style