Weight Loss Before and After: Lovebirds Lori And Tony Lost 131 Pounds Together 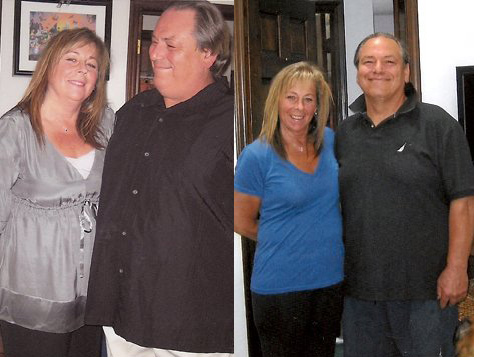 How We Gained It: (In Lori’s words) We gained weight because we overate most of the time. In fact, we usually wouldn’t leave the table until we felt really full. We never considered portion size.

I had been battling weight issues for quite some time and had suffered from rheumatoid arthritis all of my life. We had both made attempts to “diet” multiple times in the past with little success. The two of us became very frustrated and clueless as to why we could not lose weight and keep it off.

Breaking Point: My weight loss journey was first sparked by the love of my life — my husband. I thought Tony was headed towards a heart attack, as he was carrying around 318 pounds and was huffing and puffing with every step. My husband is truly my soul mate and I felt his health was now in my hands.

We’d heard from a few friends about Weight Watchers and their philosophy on portion size and eating the right foods. Though we had tried numerous diets before, I was not ready to give up our mission to lose weight, as I knew my husband’s life and our enjoyment of life together literally depended on it. We decided to give it one more try and joined Weight Watchers together. Little did we know that this was the beginning of a transformation of our minds, bodies and souls.

How We Lost It: Since joining Weight Watchers, my husband and I have learned that dieting does not work. Instead, we learned the importance of portion size and the proper way to eat. We eat lots of fresh vegetables and fruit, and avoid anything fatty or sugary. I love to bake and have learned to do it in a healthier way — it still tastes great! Tony is my biggest fan — he says he feels like he eats in a five-star restaurant every night.

RELATED:   How I Lost 135 Pounds: Jared Transforms His Body With A Healthy Diet

Along with my goal to help my husband lose weight , the benefits of my own weight loss have been incredible — at 38 pounds lighter, my large joints no longer ached as much. Tony has lost 93 pounds and his blood pressure and cholesterol levels are all now at normal levels. He works out at the gym regularly and walks three to four miles a day.

Our marriage has improved too — our son Jonathan is mortified to admit that we act like high school sweethearts again.

It took Lori and Tony 17 months to slim down. They reached their goal weights in November 2009 — together.

Lori and Tony aren’t the only ones with great success stories — check out how another Tony managed to lose 100 pounds.