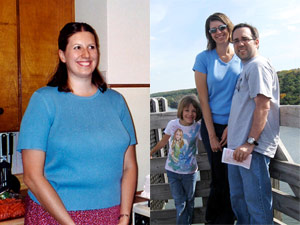 You can name a million different reasons for wanting to lose weight — and trying to fit into smaller jeans is just the beginning. Take it from these four triumphant women!

“I lost it for my husband”

As the oldest of eight kids, Katie Squires learned early on to fill up her plate before the food was gone. Years later, at size 20, Katie, then 33, still didn’t pull back on portions. But at nearly 6 feet tall, she wasn’t worried about looking fat. “I figured I could carry the extra weight,” she says.

Instead, her concern turned to her husband, Scot. At 33, he was overweight and had high cholesterol. After medication failed to work, his doctor urged him to lose weight. In January 2007, Scot asked Katie to join Weight Watchers with him; he needed her support. Because he was too embarrassed to walk into a meeting of all women, Scot hoped Katie would attend meetings on Saturday mornings, while he followed the program online. At the time, Katie was working full-time and going to school as well as caring for their two young children. “I assumed that Scot thought I needed to lose a little weight, but that wasn’t what bothered me,” says Katie. “I was upset because I didn’t want another commitment, especially on the only morning I could sleep late.” But she decided she had to do this for her husband. He’d always been supportive of her — when she’d wanted to go back to school to become a speech language pathologist, he’d brought home school brochures. She also worried about the health problems that ran in Scot’s family, such as diabetes, high blood pressure, and congestive heart failure. Katie wanted to have her husband around for a long time.

Every week the couple shared the Weight Watchers tips they learned. At first they used special measuring spoons Katie bought at her meeting to figure out “normal” serving sizes. They began reading labels and cut back on processed foods. And they found ways to eat fresher, more healthful foods without spending a fortune: Once a week, they logged on to e-mealz.com and printed out a week’s worth of budget-conscious recipes that worked with the Weight Watchers points system as well as a grocery list. Katie was happy to see her husband losing weight — and it felt good to know that she was helping him stick with it.

After a year of teamwork, the couple had a lot to celebrate. Scot lost 35 pounds, and best of all, his total cholesterol level was in the healthy range, dropping to below 200. Katie slimmed down to a size 10. Looking at old pictures, she realizes now that she’d needed to lose some weight. “I don’t regret those lost minutes of sleep at all,” Katie says. “Going to those morning meetings was the best thing I could do for us as a couple.”