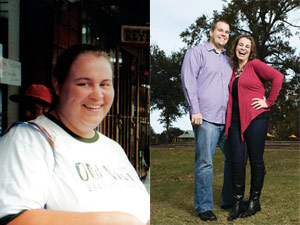 You can name a million different reasons for wanting to lose weight — and trying to fit into smaller jeans is just the beginning. Take it from these four triumphant women!

As a teenager, Laci Mahler had the life she wanted mapped out in a notebook: Go to college, get a master’s degree, be married by 30, and start a family. But in her 20s, that plan seemed elusive: Her weight — 324 pounds — kept her from socializing much, and as an elementary-school teacher with only one male (married) coworker, she wasn’t likely to meet a guy in her daily life. To get her happy ending, Laci would need to go after it.

With her master’s degree almost complete in February 2006, Laci looked forward to the next phases of her life plan: marriage and a family. But she knew she needed to get serious about weight loss to feel more confident and comfortable socially. She often chose staying home over doing physical activities like rock climbing (uncomfortable because of her size). She didn’t even like going to the movies (where many times she couldn’t fit into the seats). She’d tried, and failed, to diet before. This time, she joined Weight Watchers.

On the program, she cut back on portions and filled up on fruits and vegetables. She also found healthy outlets for her emotions: “After a great day at work, I’d walk with a friend,” Laci says. Though the pounds began to drop off, she hit a few plateaus where the scale barely moved for weeks. During those times, she panicked that Weight Watchers, like all the other plans she’d tried, had stopped working. She kept her focus, though, and after one year was 100 pounds lighter.

Now feeling bolder, Laci was excited when a friend passed along the email of a guy who seemed like a good match. For two months, the two emailed and talked on the phone. Her first date with Chris was at Applebee’s, which offers a Weight Watchers menu; they both ordered off it. “I had been up front about my weight-loss goals,” Laci says. “When Chris ordered off the Weight Watchers menu, it showed me that he was supportive.” Future dates were more adventurous: Laci was finally able to go rock climbing and horseback riding — and to see a movie comfortably. If all they did was watch TV, she admits, the relationship might have fizzled.

But it didn’t. In May 2009, Laci walked down the aisle in a size 10 wedding gown, one with a snug corset, and pledged her love to the man who’d helped her complete her storybook dream — at 30, just like she’d planned.