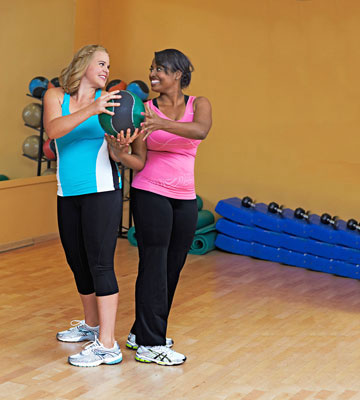 “Women in my family have had heart problems, and they’re the same size as I am,” Tabitha says. “My 10-year high school reunion is next fall,” Tanya says. But when doing it solo wasn’t working — “I used to shop for the strongest diet pills,” Tabitha admits — these nine-to-fivers for a government contractor in upstate New York joined forces.

Since both Tabitha, at 220 pounds, and Tanya, at 215, yearned to get below the 200-pound mark, they needed support, stat. Enter Jessica Surdey, a trainer at Court Jester Athletic Club in Binghamton, New York, who created a new circuit workout with cardio bursts every week to keep things fresh, and Cynthia Cave-Gaetani, RD, a nutritionist in Binghamton, who balanced their diets by cutting their calories and boosting protein to control cravings.

RELATED:   How I Lost 135 Pounds: Chris Loses The Weight Through A Gift From a Friend

Dashing from work to the gym was tough, but “Tabitha would save a spot for me in class,” Tanya says. The pair tried everything from cardio fusion to something called Drums Alive, which involved drumsticks and loads of squats. They also back each other up in resisting gooey appetizers when dining out with friends and send each other “meet me at the water cooler” e-mails so they get plenty of H20. “It’s double the willpower,” Tabitha says. And it’s working: So far they’ve each lost 30 pounds. “We’re actually having fun,” Tanya says, especially when friends high-five them on the Facebook page they’ve created for their ongoing mission.

Related Itemspersonal trainer
← Previous Story Feeling Great!
Next Story → Weight Loss Before and After: Theresa Fell In Love With Zumba And Lost 107 Pounds