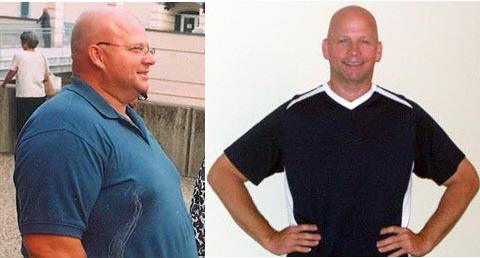 Phillip Adlof, 45, realized that the best way he could protect his family was by staying alive and healthy

Growing up as a self-described “scrawny little boy,” Phillip Adlof, 45, had always wanted to be big. When Phillip was young, he witnessed his brother get attacked by a German shepherd and ran to his father for help. “My dad ran into danger and saved my brother. From then on I thought that if I was bigger and stronger than my daddy, I could take care of everyone,” says Phillip.

A football player in high school, Phillip bulked up and his coaches encouraged him to “get bigger” and “get faster,” but then he got injured and had to quit. “After I blew out my knee, there was no one telling me how to stop getting bigger, so I ballooned up to 255 pounds,” says Phillip.

The Turning Point
By the time Phillip was 39, his weight had reached a whopping 360 pounds. Diagnosed with pre-diabetes, high cholesterol, high blood pressure, a fatty liver, and sleep apnea, he decided that he needed to take control of his health. “I felt like I was falling apart at the seams,” says Phillip. “I didn’t want to be fat and 40.”

The Lifestyle
In early summer 2006, Phillip signed up for Weight Watchers. Following their Points system he learned about proper portion sizes and began tracking what he ate online. “Before I would eat until I hurt, but following Weight Watchers made me actually pay attention to what I was eating,” he says. For the first time, Phillip realized that when doused with croutons, nuts, and dressing, his salad had nearly as many calories as a steak dinner.

Since Phillip lives 30 minutes outside of the closest town, heading to the gym is too much of a hassle. Instead, he exercises at home by following DVDs. Phillip started with Tony Little DVDs and has since worked himself up to P90X; he rotates between different DVDs to fight boredom.

The Motivation
Phillip’s greatest motivation to lose weight came from his “girls”—his wife and daughter. “I wanted to be here for them for a very long time,” he says. “And as I lost weight my mind cleared up. I became a better father, a better husband, a better person. I have learned that being healthy, and being around, is the best way to protect my family.”

RELATED:   Real Weight Loss Success Stories: I Lost 45 Pounds And Kept It Off

The Reward
In 2008, Phillip—then 170 pounds lighter—suffered a heart attack behind the wheel. Due to a genetic blood disorder, he had a widow-maker blood clot in his right coronary artery and another one blooming in his aorta. After the doctors had removed the clots, Phillip questioned how he could have a heart attack when he was so much healthier. “My cardiologist patted me on the leg and said, ‘Son, if you hadn’t lost all of that weight, your heart would have stopped in the car,’” Phillip recounts. “ He told me that I saved my own life.”

Phillip’s Tips
Find a good support network. “I have great support from home, but I also like going to the Weight Watchers meetings since everyone is going through a similar journey. Without it, I would have gone back to my old ways.”

Losing weight is a lifestyle. “People think that there’s a magic bullet to weight loss—a magic pill—but it’s perseverance. Pick a diet and fitness routine that you can live with and maintain.”