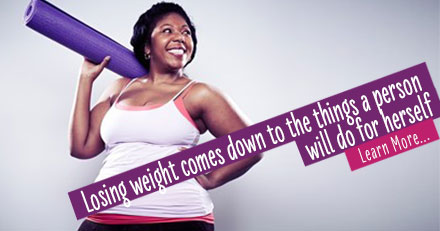 DAYTON, Ohio — Shellee Upton knew all the lies to tell herself when she weighed close to 310 pounds. The chips in the cabinet were for her kids. The cookies were for any friends who came over. She was breastfeeding, so she couldn’t diet.

“But you don’t have to weigh 307 pounds to nurse a baby,” Upton says now, 125 pounds lighter after adding just 15 to nurse her 1-year-old. Her kids and friends didn’t really need all that junk, either. She can’t eat what’s not in the house.

“Most overweight people are just looking for the excuse to have that cookie,” says Pat Smith, 49, of Wilmington, Ohio, who has lost 183 pounds in the past 14 months. “They want people to encourage them. If someone says, ‘Oh, just have one,’ that takes away the guilt. But my family and friends kept me on track. You have to find those people.”

The first step to losing weight is often eliminating the excuses to gain it, say successful dieters like Smith and Upton who have kept off more than 100 pounds. They and three others from the Dayton area were able to shed so much weight largely through the specific techniques they learned, some to remove temptations and others to make diet and exercise acceptable, even enjoyable at times.

If their healthy food didn’t taste so good, they found better recipes. If they were hungry because they were tired, they went to bed. If the rest of the family left doughnuts on the table, they banned the sweets from the house.

“You can’t just complain,” says Upton, 32. “You need to take responsibility for your actions.”

Taking a walk really does help a person through hunger pangs. Eating something healthy before the workplace party makes browsing binges less tempting. Diet drinks and water are filling but not fattening.“I have a friend who goes into restaurants and cuts all her meals in half,” says Linda Johnson, 55, who doesn’t go to a restaurant without low-calorie dressing for the salad. She is losing weight again after dropping 145 pounds but gaining 50 when a back injury prevented her from exercising.“Exercise is such a big part of it,” Johnson says. Besides burning calories, physical activity helps override some of the biochemistry that has gone haywire in most serial dieters, says Richard Cohen, a dietitian who met these experienced weight-loss advisers as director of Greene Memorial Hospital’s HMR Weight Management Program.

Dopamine is one of the body’s pleasure chemicals, for example, generated by enjoyment and deficient in many with clinical depression. But in order to perform its function, the brain’s dopamine receptors must work efficiently. Using PET scan brain images, Cohen says researchers have found overweight people must eat a lot more food than normal-weight people before those receptors work well.

“The other thing they found you can do to make dopamine receptors work well is physical activity,” he says.

Self-motivating techniques are important, even beyond the desire to escape the scorn and physical limits brought on by obesity.

Smith seemed to be always out of breath, and her joints hurt. It was difficult just getting into and out of chairs, walking across a room. All that was incentive to lose weight, but so was the thought of “saying without lying that I weighed one-something again.”

Johnson kept the outfit she wore for her HMR “before“ picture so she could wear it over her newer clothes, the ones with waistlines. Upton took pictures of herself once a week in the same outfit as she lost weight, looking at them regularly for motivation.

Dennis Ranshaw learned how to enhance flavors with spices instead of fats while he lost 150 pounds. Paul Eshbaugh, on his way from 310 to 200, discovered sweet potatoes were tastier and far better nutritionally than baked potatoes.

Cohen has a recipe for mashed potatoes that doesn’t use butter or milk. He substitutes fat-free yogurt, garlic and oregano in a dish that brings compliments. “We use a lot of spicier hot sauces or teriyaki, and marinating helps a lot,” he says.

As Ranshaw kept thorough records of his calorie intake, he determined it really was true what people said about eating lots of little meals. “I eat a little every two or three hours, so my body never goes real high or real low, and I live on less,” says Ranshaw, 52.

Few of the hackneyed rules lack exceptions, though. It worked for Upton to stop eating at 5 p.m. so she’d be hungry for that “all-important” breakfast meal, but Eshbaugh never could work up a morning hunger. The 62-year-old man doesn’t eat most of the day. “We don’t go out and plow the fields after our big breakfasts anymore,” Johnson says.

Some battles are worth fighting, and some are not, Cohen says, and it’s essential to know the difference. The one weight-loss rule that can’t be violated is that calorie output has to exceed calorie intake. As long as that happens, the calorie intake can include pie or ice cream or an occasional big ho liday banquet.

“People have always feasted throughout history, but feasting doesn’t always go with weight problems,” Cohen says. “It’s what you do the rest of the time.”

Upton doubts if she could endure a regimen that ruled out cookies and ice cream for the rest of her life. She had been on weight-loss programs with forbidden-food lists. “Of course, if you make a no-no food list, those are the foods you’re going to want,” she says. “You can still eat those foods, if you do it in moderation.”

Many a diet has ended in the flames of unrealistic expectations, Cohen says. People often think their weights and any setbacks constitute personal failings, but nobody is stronger than the powerful psychological conditioning that leaves them believing food is the ideal response to grief and joy, stress and relief, loneliness and fellowship.

“Poor eating habits develop over years, sometimes a lifetime,” Cohen says. “Turning this lifestyle around takes a long, long time — long enough for new coping strategies to develop and new healthy choices to become a habit. We spend a lot of time on relapse management.”

The need for social support isn’t always a popular weight-loss tip, but Cohen says considerable research associates success with attendance at support meetings. Support in close relationships is even more important, he says. Johnson attributes her success in part to her husband’s assuming the cooking duties so she can spend less time around food.

“A big reason for recidivism is an unsupportive spouse,” Cohen says. “I know women who regained their weight after their husbands sabotaged their diets and say, ‘At least I have my marriage.’ ”

Simply gritting teeth and using willpower might work for a while, the long-term weight losers say, but eventually they’ll need coping skills for when the willpower runs out. Ultimately, Eshbaugh says, losing weight comes down to the things a person will do for himself. “Willpower is what you won’t do.”