“Losing 123 pounds together strengthened our marriage” 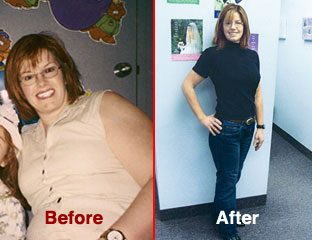 Wendy Wagler and her husband Mark lost a combined 123 pounds with lifestyle changes, making for a happier, healthier marriage.

I have always battled with my weight. My husband, Mark, has struggled with his, too. We were each about 30 pounds overweight when we got married 15 years ago. After having three children, I became a stay-at-home mom and fell into the habits of eating out of boredom and convenience, picking off the kids’ plates, watching TV all day, and eating out frequently. After 13 years of that routine, I gained nearly 40 pounds, and so did Mark.

We were constantly yo-yo dieting with Atkins and other fad and crash diets. But every time we reached a weight-loss goal (for me it was usually 20 pounds), we returned to our old habits, and the weight crept back on. It always felt good to lose weight — everyone gave us compliments — but it was depressing to gain it back again. We simply didn’t know how to keep the weight off. We’d find it in ourselves to diet again, but there was a constant fear of failure lurking in the back of our heads.

Then, two years ago, Mark got serious. I was fine with doing the same old crash diet, but he meant business this time. He had visited an L A Weight Loss center and made appointments for both of us, knowing that it would be easier to diet together. I resisted because I didn’t want to spend the money on the program. But he made an appointment for me, so I went. Since we were now in our 40s, we also realized that it was now or never. Being overweight meant there was a good chance that we’d face serious health problems in the future. That was a big motivator. My father’s side of the family had diabetes, and Mark’s family had heart problems. We didn’t have any health concerns yet, but our physical energy was suffering. We were too tired to play with the kids and felt like our bodies were just out of whack.

The program required us to attend meetings three times a week to learn about food choices, report our progress, and keep ourselves in check. We learned about healthy portion sizes, eliminated processed foods from our diet, and planned meals based on fresh ingredients. At the meetings, Mark was always the biggest loser of the week. I was content because I was steadily losing 2 pounds a week, and it was encouraging when my clothes felt loose.

Suddenly, our energy levels skyrocketed. We bought elliptical and weight machines, a set of free weights, and an exercise ball for our basement. We also bought bicycles and took a weekend bike tour aroundNiagara Fallsto test them out. We began taking family walks for an hour at least twice a week.

In a year, I’d dropped down to 129 pounds from 190, and Mark had lost 62 pounds — going from 230 to 168. It finally felt good to shop for clothes — I’d shrunk from a size 20 to a size 5. I even bought a bikini for the first time in 30 years. With every pound I lost, I felt like I was becoming someone new. I gained confidence and no longer woke up every morning worrying about my weight. I stopped feeling like people were judging me for being fat. And losing weight helped me realize that my other goals were within reach, too. I went back to school and earned a diploma in medical technology. Before I lost weight, I’d never have had the energy and dedication that school required.

It would have been hard to diet individually because it really requires a lifestyle change. But now that Mark and I are slim, eating well, and exercising, we have fewer health problems looming over us, and that’s a relief. And we’re definitely more attracted to each other. With his new body, Mark looks like he can do a James Bond movie! That keeps me motivated — since I’m 007’s wife, I’d better look good, too. I credit our success to doing it together. We had a good relationship to begin with, but now we’re even closer because we accomplished something important together.