Lose the “Married 15” and Get Back to Your Wedding Weight 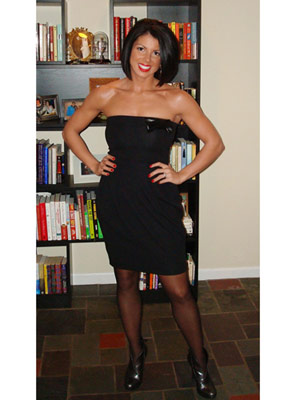 After getting hitched, Magda Cardoso Gale gained the “married 15.” Determined to take control of her health, she put on her sneakers, hit the road, and strengthened her body — and her marriage.

“I looked great on my wedding day — but it didn’t last.”

I never looked better than I did on my wedding day, in June 2005. Growing up, weight had always been a struggle for me. But by cutting out junk food, packing healthy lunches to take to work, and lifting weights and taking spinning classes at the gym four or five times a week, I lost 10 pounds for the wedding. At 145 pounds, I knew my toned arms looked good in my strapless dress. Because our wedding took place inPortugal, my husband, Rob, and I planned a big party at home in August for friends and family who couldn’t make it. By then, I had already started to slip: I wasn’t going to the gym or bringing lunches to work anymore. My wedding dress still fit, but it was much more snug this time around.

As we settled into married life, my focus slipped even further. Going to the gym couldn’t compare to snuggling on the couch with Rob and ordering takeout. For breakfast, I’d eat a muffin or a sausage-egg-and-cheese sandwich. For lunch, I’d order a bag of chips and a lobster roll oozing with mayo. The takeout guy even started to recognize my voice and would ask if I wanted “the usual.” A year after the wedding, I reached an all-time high of 165 pounds. It was a huge blow. I’d tell Rob, “I’m not the same woman you married.” I considered returning to the gym, but everyone there had seen me slim down for the wedding — it was too embarrassing to go back having regained the weight.

“I could control only myself.”

In October 2006, I went to the doctor for a checkup and was shocked to learn that I had borderline high cholesterol. No one in my family has high cholesterol; I knew my poor eating habits were to blame. A month later, I was faced with a major heartbreak: My parents, who had been married for 32 years, decided to separate. I thought their marriage would last forever, but I knew there was nothing I could do to fix it. That realization made me think about what I could control — and that was me.

“I knew I could do it because I’d done it before.”

I decided to lose 31 pounds by my 31st birthday, six months later. I set up a reward system for motivation: After I lost the first 10 pounds, I would get eyelash extensions; after 20 pounds, I would get a tattoo; after 30, I’d get my nose pierced. I knew I could do it because I had lost weight before. I aimed to eat 1,200 to 1,400 calories per day. For breakfast, I wrapped eggs and fat-free cheese in a whole-wheat tortilla with a side of sliced tomato. For lunch, I’d fill a whole-wheat wrap with grilled chicken, or I’d pack a Kashi microwavable meal. For dinner, Rob grilled fish or chicken. If we ordered takeout, we chose healthier options, like sushi. I also started drinking more water and headed back to the gym. This all took planning — instead of crashing on the couch after work, I had to pack my gym bag and prepare food. But after a few weeks, I fell into a routine and still found time to cuddle with Rob.

My first month back at the gym, I did 30 minutes on the elliptical machine or StairMaster each day. During December, the scale didn’t budge. But I started to feel better physically and emotionally; Rob would even comment on my good spirits. The next month, I got back into spinning and weight training, and by the end of January, I’d lost five pounds! Around that time, I started a blog on sparkpeople.com. I would post my workout plan for the following week and then come back and list the workouts I’d actually done. The blog also gave me a place to write about my ups and downs — like the time I ate three ice cream bars in one sitting. Soon, other members were commenting. They’d say, “Great job at the gym!” or, “I’ve had moments like that.” We were all a part of a community of support.

After that initial weight loss, I consistently lost five pounds a month. I reached my 10-pound mark in January (and got my eyelash extensions!), then my 20-pound goal in April. I got a tattoo on my back: wings, which symbolize strength, faith, and love. After that, some weeks I’d lose three pounds, but other times the scale wouldn’t move or I’d gain a pound, which was frustrating. I kept telling myself that the scale would eventually move if I kept working at it.

“The first time I stepped on a treadmill, I ran three miles!”

In April, I was on a business trip and the elliptical machine at the hotel gym was broken, so I was forced to get on the treadmill. I was petrified of running — it was way out of my comfort zone — but I told myself I would try to run one mile, which turned into two, which turned into three. It felt amazing! When I got back to the gym, I told my friend Yael about my accomplishment. She suggested that we run a 10-mile race in July. Crazily, I agreed — six months before, I couldn’t even run a mile! Yael helped me stick to the plan. By my 31st birthday, in May, I was down to 138 pounds. I hadn’t reached my goal, but it didn’t matter; my goal had shifted from a number on the scale to completing a 10-mile race.

“Once I started running, I couldn’t stop.”

I feared that after the 10-mile race, I would fall back into old habits, like I’d done after my wedding. So by race day in July, I had already signed up for a half-marathon in October and a full marathon in December. I wound up running alone since Yael was called away on a last-minute business trip. I’ve never been so petrified. Rob kept telling me that I could do it. And I did! I then completed both the half and full marathons, and by the end of the year I was down to 132 pounds. (Even though I’d reached the 30-pound mark, I had second thoughts and decided not to get my nose pierced.) Next, I signed up for a triathlon without knowing how to ride a bike or go underwater without holding my nose. With Rob’s help on the bike and a trainer in the pool, I was able to complete that too. Training together has brought Rob and me closer. He always loved me, but now he tells me that he has the hottest wife in the world.

“I’m so proud that I never gave up on myself.”

My next goal is to qualify for the Boston Marathon, and I dream of doing an Ironman competition. I never want to stop pushing myself physically. I still blog. I like to read my older posts and reflect on all I’ve gone through. I feel good knowing that I might help or inspire other people. When I look in the mirror, I smile at my reflection. It took hard work, but the payoff was worth it. After all these years, I found an athlete inside me.

What Magda Learned to Do

* KEEP CREATING INCENTIVES. “I didn’t want to fall into old habits after my 10-mile race, so I signed up for a half and a full marathon before race day.”

* PLAN FOR SUCCESS. “Failing to plan is planning to fail. You must plan your meals and workouts, and you must stick with your plans as closely as possible. If I’d allowed every lunch meeting or office party to get in the way, I’d never have reached my goals.”

* START EVERY DAY FRESH. “We’re all human and we’re all going to have slipups, and that’s okay. Instead of dwelling on them, move on and embrace the opportunity that exists with each new workout and meal.”

* DON’T STRESS OVER THE SCALE. “There are bigger indicators of success than a number on a scale. I didn’t lose a pound my first month of eating better, but I felt happier and more energetic. And though I didn’t drop 31 pounds by my 31st birthday, I was training to run 10 miles, which was huge!”

* LIVE IN YOURSELF. “I’m living proof: With faith and discipline, you can accomplish whatever you put your mind to.”

Don’t Let Fear Hold You Back

Two years ago, Magda had barely run a mile, ridden a bike, or gone swimming underwater. Today, she’s a marathoner and triathlete. You can make big changes too, says John Spencer Ellis, CEO of the Spencer Institute for Life Coaching. Here’s his advice on how to venture outside your comfort zone:

* TAKE BABY STEPS. Don’t try to run five miles your first time out. Over-doing it will only make you want to quit.

* FIND A TEACHER. Tackling a new challenge alone makes it more frustrating. Turn to an instructor or an experienced friend to give you feedback and support.

* LAUGH AT YOURSELF. Being able to shrug off mistakes puts failure into perspective. (Really, what’s the worst that can happen?)

* ENVISION SUCCESS. Think of something you do well — even if it’s your keen ability to get the kids out of the house on time — and recall how you worked up to where you are now. Then apply those same steps to your new goal.

Related Itemsrunningspinning
← Previous Story Before And After: Natasha Loses 115 Pounds After 28 Years of Obesity
Next Story → Molly’s journey