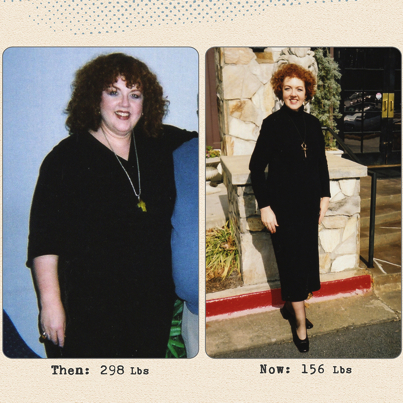 BEFORE THE TRANSFORMATION: Back then, life was a series of humiliations.

I was a family photographer so that I didn’t have to be in the shots.

When my kids got to a certain age, I knew that they were wishing that I could look like mommies that had a normal size body.

Getting on an airplane was scary because I didn’t know how it was going to feel.

Right before I had the bariatric surgery I had to take a flight to the coast, and the plane that I was in I had to back into the bathroom because I couldn’t turn around inside it. I was so big.

THE TURNING POINT:  I was a hospital chaplain and I got a chance to see what Type II diabetes could do. That woke me up because I knew that I was headed there if I didn’t do something. And for some reason that spoke louder to me than having a heart attack or a stroke was watching people get amputations on installment plan. I thought, “No, I can’t do that.”

WHY BARIATRIC: A yo-yo dieter like me would wish to have PhDs in dieting. The diets don’t fail. I couldn’t stand the photo of being in a body that might get attention. And as soon as people started to say, “Wow! You look great,” that was the beginning of the end. The decision to have bariatric surgery is an important one but I think people consider it for the wrong reasons. They hear that it’s got a 90 percent success rate, five years out, although I would challenge those statistics, and it’s the magic wand. But that’s the same kind of mindset that we bring to every diet that we’re on. And the fact is that when I became a life coach two years out of my surgery, most of my first clients were people who’d had bariatric surgery and had gained back half a weight. I thought, “What are you going to have to do to make this a success and not a failure?” And that’s when I realized that I had to overcome my fear of being in a healthy strong body.

RELATED:   I Lost 70 Pounds: Denise Is In The Best Shape Of Her Life!

THE BIG PAYOFF: For me staying strong has been so much fun because when I travel I can climb a gazillion stairs to get to the top of St. Peter’s Cathedral and when I was there with my mom 13 years ago I couldn’t.  I remember after the surgery being on another business flight and somebody had dropped something in the aisle and without any thought I stooped down, picked it up, stood up, and handed it to them and continued walking. And then like three rows down I stopped and went, “Oh, my God! You just squatted down and stood up again.”