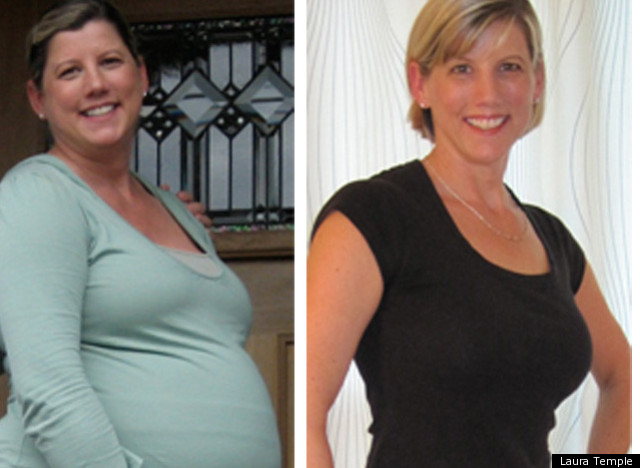 How I Gained It: I have been a classic yo-yo dieter my entire adult life. I’ve had a love/hate relationship with food. I love good food, but I hate the way I feel when I overindulge. In 2005, I was able to lose 27 pounds with Weight Watchers Online and following Oprah’s Boot Camp.

Then in 2006, I got more serious about trying to get pregnant (the clock was ticking away since I was 42 years old). Fertility treatments, including hormone shots for in-vitro fertilization, didn’t help me keep all that weight off. The treatments also didn’t work, and the stress of not being able to get pregnant drove me to indulge in my passion for cooking and baking. Cherry pie anyone? Coq au vin? I was cooking (and eating) lots of great food.

I had gained back all that weight I lost in 2005 when in November of 2006, found out I was pregnant. It was truly a miracle, since all the fertility doctors told me that at my age, I had maybe a five percent chance with fertility treatments, and I had decided not to pursue any more of that. I was even more thrilled when the pregnancy took hold (I had suffered two previous miscarriages). By the time all the tests were completed and I was not as stressed about whether my baby would be healthy, I had acquired a not-so-healthy daily doughnut habit on my way into work and frankly just wasn’t watching what I ate.

One week before my baby was born in July of 2007, I weighed 236 pounds. I had to face the fact that I wasn’t going to lose the 50-plus pounds I had put on since becoming pregnant, just by giving birth. After I had my baby, I weighed 220 pounds.

Breaking Point: The first 12 pounds came off pretty easily after I had my baby boy. Then I realized that I needed to get serious if I didn’t want to have to wear maternity clothes to work when my family leave was over. It was really pure vanity that pushed me to get my act together. I didn’t want to have to buy plus-sized clothes and I wanted to be able to fit into my regular business clothes again.

How I Lost It: Sheer determination! Unless the weather was unbearable (I lived in Seattle), I put my baby in the stroller and took a one-hour walk every day until I had lost about 20 pounds. When I was down to 200 pounds, I felt I could try jogging for maybe 20 minutes. I gradually worked up to running 35 minutes and made a point to get out the door (or into the gym) at least four times a week.

At the same time I was increasing my exercise, I joined Weight Watchers Online and started tracking points. The weight just started falling off of me and I lost 40 pounds in a year. After 14 months, I had reached my 50-pound weight loss goal and weighed 158 pounds. I hovered within four pounds of that weight for 16 months. I thought I had succeeded…until I started to gain it back. A stressful job situation and then subsequent relocation across the country with my family got me off track again — yo-yo up!

By May of 2011, I weighed in at 175 pounds and just couldn’t take it any more. I got serious with Weight Watchers Online again and started running nearly daily with the goal of losing an even 20 pounds by the end of August. On August 27, I reached my goal of 155 pounds.

I would like to point out that while it took me 17 weeks to lose that last 20 pounds, I did it in the summer when there are lots of seasonal temptations (barbecue, margaritas, wine, vacations and house guests to cook for). I know I could have lost it faster, but really wanted to enjoy my life while I was also succeeding. I found that using the Weight Watchers Online tools (particularly the iPhone application — love it!) kept me in check, even if I had a rough week. At least I knew I had gone over my points allowance –- yes, there were two weeks when I actually gained during that time. The key is not giving up over small setbacks. I now see my points tracking as a security blanket. As long as I don’t lie to myself about portion sizes, and as long as I keep track of everything, I will lose weight. I try to make healthy food choices, and Weight Watchers helped with that. These days, I know that while I can have a doughnut if I want to, it means I can’t have lunch. I’d rather have a healthy lunch, so I don’t usually indulge.

I have now re-set my goal to lose another seven pounds. I want to weigh in at 148 pounds by my 48th birthday on October 22nd of this year. I truly believe anyone can lose weight if they get their mind in the right place. Losing weight starts with a decision — then you need to have the determination to see it through. And, while I’ve had my struggles with weight loss and gaining it back and finally losing it again, I am going to hang onto that determination that got me here and not let go.

Related Itemsjoggingrunningweight watchers
← Previous Story Weight Loss Before and After: Peg Cuts 73 Pounds And Relieves Menopause Symptoms By Jogging at Home
Next Story → Weight Loss Success Stories: I Lost 75 Pounds And Kept It Off