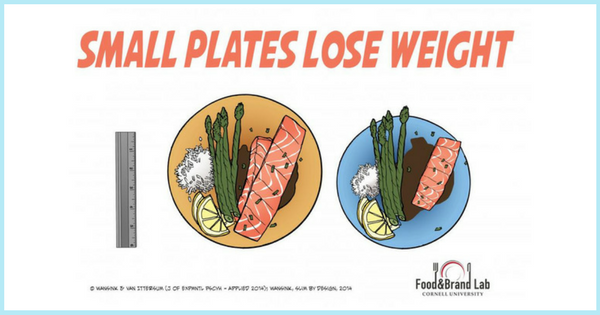 Recent research by Professors Brian Wansink and Koert van Ittersum explored how a well established optical illusion leads us to make inaccurate estimates of serving size, depending on what size plate they are presented on. The Delboeuf illusion [see image] has long been known to cause us to misjudge the size of identical circles when they are surrounded by larger circles of varying sizes. The more “white space” around the circle, the smaller it appears.

Wansink and van Ittersum found that the same applies to the plates and bowls we use every day. Larger plates can make a serving of food appear smaller, and smaller plates can lead us to misjudge that very same quantity of food as being significantly larger. For example, in a study conducted at a health and fitness camp, campers who were given larger bowls served and consumed 16% more cereal than those given smaller bowls. Despite the fact that those campers were eating more, their estimates of their cereal consumption were 7% lower than the estimates of the group eating from the smaller bowls. This suggests that not only could large dinnerware cause us to serve and eat more; it can do so without us noticing and trick us into believing we have eaten less.

What can we do to combat this powerful effect? Simply educating consumers to be aware of the effects of the Delboeuf illusion may not be enough to overcome it. Wansink and van Ittersum argue that changing our environments by replacing dinnerware is a better solution. We can take advantage of this visual “trick” by manipulating the dinnerware we use to serve various foods. Healthy foods such as fresh vegetables should be served in larger plates to encourage consumption, while less healthy foods should be served from smaller plates to trick our sweet tooth into feeling satisfied with less.

In addition to helping us trim our waistlines, this research could also help us make significant reductions in food waste and costs, especially in all–you–can–eat restaurants, where the use of smaller plates could significantly cut down on the amount of food customers consume and waste. This is a win–win situation that saves restaurant owners money and helps restaurant–goers cut down on serving sizes while still feeling satisfied. It is especially advantageous because it does not leave the consumer feeling cheated. On the contrary, Wansink and van Ittersum found that not only does the extra food we serve ourselves from larger dishes go more or less un–noticed, we do not attribute any extra financial value to it. Results show that consumers find a 3:4 fill level to be the most aesthetically pleasing and that overfilling beyond this level does not increase perceptions of value.

Related Items
← Previous Story Self-weighing may be a hazardous behavior among young women
Next Story → Work, pedal, and be happy