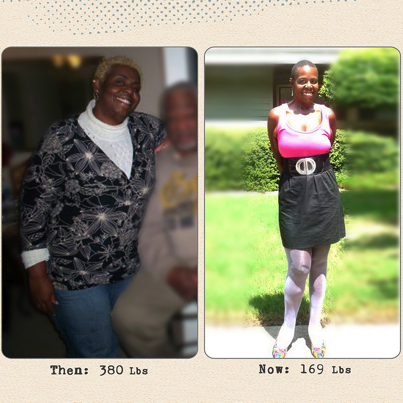 BEFORE: When I was 380 pounds I used to go to McDonald’s and get the 20-piece nugget, supersize fry, big shake and the ice cream cone.

Two hours later, I was too embarrassed to go to the same McDonald’s so I would go to a different McDonald’s and order the same thing all over again.

It doesn’t include the 10 or so condiments of sweet and sour sauce that I would have to go with it.

THE TURNING POINT: In late December 2004 I was diagnosed with breast cancer.

I had to make a decision and I decided not to have a surgery for the cancer or the weight loss and decided to live by faith and try to fight both naturally.

And that’s what I’ve done. The cancer and I, we’re living together.

We’re coexisting for however long time to come.

THE PLAN: I’ve tanked my food regime. It seems like the food I eat now gives me a lot more energy, because they’re fresh ingredients, fresh fruit and vegetables and wholesome foods as opposed to a lot of processed items that I don’t use anymore.

THE BIGGEST REWARDS: It’s been overwhelming. People do not know who I am and I get looked at a lot different by the male persuasion. I’ve never looked at before as an actual lady type. They open doors for me and do things I’ve never had done before. So it’s a little overwhelming but I’ve enjoyed it to say the least. When I was 25, 26 years old, I used to watch the Little Women and wearing the cute clothes and wished I could do that. And now I’m in the 6, 7 and I can go into the little girls store and I’ll buy all the little cute young clothes. And so I’m just kind of living that over again.

WORDS OF WISDOM: Mine was a dramatic — my eating regime was a dramatic — is an extreme life change. I don’t even call it a diet because if you choose to use the word “diet,” I’ll probably die from it. So that’s kind of a cursed word around my office. I would say to them think about it carefully as to — if you really want to make the change before it’s too late or they can call me.