How I Lost Weight: Kwoni Drops 120 Pounds And Is Still Losing 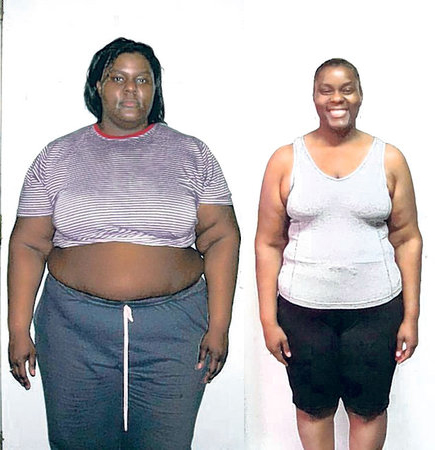 Personal life: “I work [in] downtown Atlanta as a payroll consultant. I live in Fairburn with my 5-year-old daughter.”

Turning point: “I have always struggled with my weight, but it was not until I had my daughter that I realized I was the biggest I had ever been in my life,” she said. “I was tipping the scale at 348 pounds. I started my journey in 2007 and lost 100 pounds. In 2008, like most diets, I gained 80 pounds back. The before picture in January 2009 I was at 328 pounds, but this time is different — I’m taking a different and healthier route. It’s for life this time around instead of vanity.”

Diet plan: “I tend to follow a detailed meal plan that allows me to eat four to five small meals a day. Not eating after 6 p.m. is the major key to my success,” she said. She starts her day with oatmeal followed by a spinach salad for lunch, boiled eggs throughout the day and a turkey patty for dinner.

Exercise routine: “I started my exercise routine with a boot camp here in the Atlanta area, Casi’s Straight Military Style Bootcamp. At the beginning of my weight-loss journey, it took me an hour to walk two miles. Now, I exercise [for] an hour five times a week [doing] different routines like running, kickboxing, step and strength training. Before joining boot camp, I never liked to walk at all. Now, I’m running six miles.”

How life has changed: “My life has completely changed for the better. I’m noticing things about my body and myself that some people may take for granted. For example, I can cross my legs, run more than a mile, and I even have a collarbone, which I never had before,” she said. “Getting healthy will not be a short-term thing for me. It’s become a lifelong journey.”