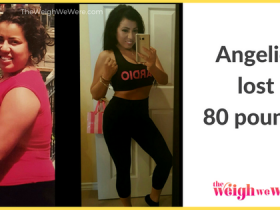 Weight Loss Before and After: Angelica Lost 80 Pounds For Her Mommy Makeover Weight Loss Transformation With Zumba

How I Gained It: Since I was young, I have struggled with my weight. I was always overweight for my age and height, and I was never taught how to eat healthy. I lost 50 pounds back in 1998 on a high-protein, low-carb diet, but quickly gained that weight back after my first pregnancy. This fad diet did not teach me anything about eating healthy as a lifestyle change. It was a quick-fix to lose weight fast and not a long-term lifestyle that I could maintain. I slowly continued to gain weight over the last 10 years due to three pregnancies, personal stress, financial hardship and the highs and lows of marriage and kids.

The highest weight I’ve ever been when I was not pregnant was the lowest point I have ever been at in my life. Food was my “drug” of choice. I turned to it as my comfort in times of distress or heartache, but also in times of happiness and celebration!

Breaking Point: I saw myself in a picture taken at my daughter’s second birthday party on April 9, 2010. I hated the way I looked! Pictures don’t lie, and it was definitely a wake-up call for me! I could hardly believe that I had let myself get so lazy and overweight! I remember wondering, “Is this how I want to live the rest of my life? Tired, worn out, no energy to play with my kids? What kind of example am I leading for my beautiful daughter and two sons? What does my husband really think of me?”

How I Lost It: My journey officially began on April 19, 2010. I made the decision to change my eating habits and to begin exercising on a regular basis. I was determined to stick with my plan to lose weight, no matter how long it was going to take. It was time to get healthy, not just for me, but for my family as well. Since it was late spring and the weather was nice, I began walking three miles early in the morning before I had to go to work about four times a week. I would also go to the YMCA at least two or three times a week to do weights and cardio on the treadmill (if I didn’t walk in the morning). I chose to follow the Weight Watchers points system to help guide me in tracking my food. The plan taught me how to read food labels, eat the correct serving size and watch my portion control. Over 11 months, I lost 58 pounds.

During the next year and a half, I used various websites and apps to track my calories in and calories out. I began interval walking and running in the summer of 2011. As I began to run more, I would push myself to run longer intervals. Three minutes turned into five minutes and so on. I remember the day that I ran my first full mile and then a full two miles!! Never did I ever dream that I would enjoy running! A friend invited me to run a St. Patrick’s Day 5K with her in March 2012. After the race, I realized that I truly had a passion for running! I participated in three more races after that.

In July 2012, I was awarded the Runner’s Roost Runner of the Month. What a special honor and award that was — and it completely surprised me! I won a free registration to a half-marathon scheduled for Labor Day. I was unsure about running a half-marathon, as I hadn’t trained for that distance, but I did it anyways, and I finished the race in 2:48:11.

A bout of plantar fasciitis meant I had to take a break from running. My weight had been fluctuating between 183 and187, and I had slowly put on a few pounds by using running as an excuse to eat more. At the beginning of 2013, I refocused and made a stronger commitment to do a variety of workouts throughout the week that included weight training, Spinning and high-intensity interval training.

I still love to run! I ran my first full marathon in October. Training was insane — running it was even more so! It was the most physically and mentally challenging thing I’ve done, and quite emotional when I finished. Now, I eat clean. I don’t have to track calories, fat or carbs. I still enjoy a splurge meal one or two times per week, but I try to enjoy that meal at breakfast or lunch. I avoid eating heavy carbs in the evenings, too. These changes have added up to huge success for me: I have dropped an additional 14 pounds.