K.C. Swapped Cookies for Yoga and Said Goodbye to 140 Pounds 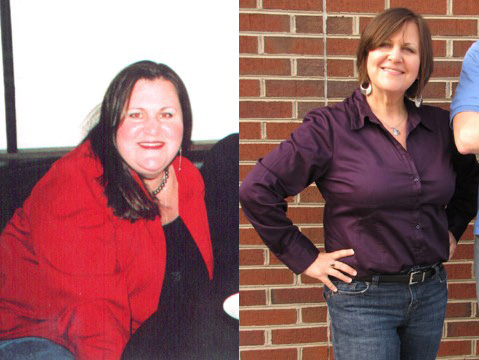 Name: K.C. O’Day is my professional name, but I was born Michelle

Age: Locked in the vault!

How I Gained It: The answer to the question “why was I fat?” is simple: Too much food and not enough exercise. The better question might be why did I indulge in too much food, and generally, as an adult, ignore exercise, leading to my own obesity? Obesity has to be one of the ugliest-sounding words in our language, one that I shunned for the longest time. Denial, I suppose. “I’m not really that fat, am I?” As long as I could convince myself that there were others who were fatter, I was OK with me, as if good health was a sliding scale. Honestly, part of me just didn’t want to notice how unhealthy I was.

So why did I indulge so much? It’s a compound answer. Too much highly processed food. Hypothyroidism. Letting the food be in control. I’m only beginning to really face the answers to those questions. Fat feels like failure, and it’s hard to admit that. But now I’ve tasted the other side, and healthier definitely is happier.

Breaking Point: My 13-year-old niece accompanied me and some friends on a trip toNew York City. We were really excited about exploring the Met, but as we walked along the streets and through the museum, my knee and my hips began to ache; I needed to sit and rest occasionally. I thought, whoa. That’s what old people do, right? I wasn’t old. I was obese, and my body was sending me a big message. It would not live long and prosper bearing the extra extra weight. I knew that if I didn’t finally get serious, my body would continue to deteriorate. I wanted to be healthy and vibrant and beautiful, which meant things had to change.

RELATED:   Weight Loss Before and After: Lesley And Mike Williams Lost 275 Pounds Together

How I Lost It: I never use the word “lost” in relation to my weight. Lost things can find you again. I will not be found by those old pounds.

Like most women, I’d tried it all: Weight Watchers, Cabbage Soup, the Grapefruit Diet, that disgusting liquid diet and anything else that sounded like a miracle. But of course, they weren’t. Most had temporary, if any, results, and weren’t maintainable in any practical way. The closest success I’d had was with Weight Watchers, but whatever weight I shed always came creeping back. The food was always in control.

About five years ago I read a small post online from a woman who said she’d heard people inEnglandwere having great success with a book that came with a hypnosis CD, “I Can Make You Thin” by Paul McKenna. It had only been published inEnglandat the time, but I ordered it on eBay, thinking, “what the heck? I’ve tried everything else.”

It’s a very slim book with a few suggestions, like “eat what you want, not what you think you should.” I thought, wow. Somebody wants me to eat what I want? This has promise! He also advises you to put down your utensils between bites (awkward at first, but second nature to me now), and eat until you’re satisfied.

But the magic was in that hypnosis CD. I started listening to it, and in a few days, I was eating much smaller portions. My body was telling me when it was satisfied. The weight melted away. I was making better, wiser food choices, and eating much less. If I wanted something like French fries, I didn’t deny myself. But I ate them as a treat, in moderation.

I committed to exercise, too. At first I spent about 30 minutes a day jogging on the rebounder with five pound weights, but as I became smaller I developed an interest in yoga. So I ordered some Kundalini Yoga DVDs online, and I’ve been hooked ever since.

Now I’m down 140 pounds and my food choices are predominantly fruits, vegetables and whole grains, but the miracle is that I like eating this way. I like knowing that if I want a cookie, I can have one. But most of the time, I don’t want a cookie. When a formerly fat person doesn’t want a cookie, let alone a box of them, then something truly miraculous has occurred!

K.C. has maintained her 140-pound weight loss for more than four years now and is never too tired for a trip to NYC these days.

Being aware of the latest research motivates me to continue adopting healthy habits.