Up until I had my first child at the age of 20 I never struggled with my weight. I was active, I could eat basically anything I wanted and didn’t have to think twice about it. Soon after I gave birth, I noticed that the weight would not come off no matter how hard I tried. I also began struggling with postpartum depression severely and this was the beginning of my detrimental love affair with food.

HOW DID YOUR WEIGHT AFFECT ANY ASPECT(S) OF YOUR LIFE?
My weight controlled every single aspect of my life. I even broke a life-long friendship off just so I wouldn’t have to walk down the isle as her bridesmaid wearing a dress. I was THAT bad.

WHAT WAS THE “TURNING POINT” THAT GOT YOU STARTED ON YOUR WEIGHT LOSS JOURNEY?
In early 2016, I began to notice dramatic changes with my vision. While watching television or working on my computer, I would see random shapes jumping around the screen, bright colors that weren’t there, and I began to feel immense pressure behind my right eye. After seeing an optometrist, a neuro-ophthalmologist, a neurologist, and enduring multiple medical tests, I was finally diagnosed with pseudotumor cerebi, also known as IIH.

This is a rare neurological condition that mimics a brain tumor without a tumor being present. Your body overproduces cerebrospinal fluid and that fluid begins putting enormous pressure on the brain. My health began deteriorating quickly and I soon found myself nearly blind, beginning to stumble as I walked, struggling to think of simple, every day words, and the migraines were becoming unbearable.

Having already tried different medications without success and lumbar punctures only helping decrease the fluid for a day or two, I was faced with the decision of having weight loss surgery or having a shunt placed in my brain to drain the fluid. Knowing the failure rate on the shunts as well as the high risk of infection, I opted for weight loss surgery.

HOW DID YOU GET STARTED?
Obviously having weight loss surgery forced me to change my ways. No more junk food. No more fast food.

HOW LONG AFTER YOU STARTED DID YOU BEGIN TO SEE RESULTS OF YOUR WEIGHT LOSS EFFORTS?
It was several months before I began to see any results. My body took longer than most to begin losing.

WHAT WAS THE HARDEST PART?
When we are overweight, we tend to believe it’s the cause of all of our unhappiness. It’s not until the weight is gone that you realize those demons are deep-seeded within you, not in the scale.

As crazy as it sounds, my brain struggles with seeing the progress at times. As I sit here, I still feel like that 315lb woman although I know I am not. Then there are days I look in the mirror and wow myself. It is a huge mental struggle. My mind plays tricks on me and I am just an unwilling bystander in the middle of its tug-of-war.

DID YOU EVER WANT TO GIVE UP? WHAT KEPT YOU GOING?
Emotionally, it has been harder. I was surprised by this. I thought that what I lost in weight, I would gain in happiness. I found myself struggling more severely with depression, even my own existence at one point, but the love of my children along with family and friends pushed me through this.

DID YOU HIT ANY WEIGHT LOSS PLATEAUS? HOW DID YOU OVERCOME THEM?
All the time! The first thing I did was throw my scale out. Seriously. That thing hindered my progress. I was so hung up on the number of the scale that I was stressing my body out. I now only weigh myself about once a month. I was doing it daily.

RELATED:   How I Lost 123 Pounds: Rich's Transformation From Fat To Fit

HOW LONG DID IT TAKE YOU TO LOSE MOST OF THE WEIGHT?
18 months.

DID YOU HAVE ANY NON-SCALE VICTORIES?
A few months following my weight loss surgery, I began to see improvements. I felt better and my vision was slowly improving. Fast-forward 18 months and I am down 165lbs, I feel amazing and best of all, I am in remission. The IIH is essentially gone. I still struggle with dizziness upon standing and an occasional migraine, but it is nothing like it was before.

HOW DOES YOUR PHYSICAL ACTIVITY COMPARE TO WHEN YOU WERE HEAVIER?
I wish so badly I could be the person boasting about their dedication and hard work in the gym, but I am not. I am a mother of three and in nursing school so I barely have time for anything else.

My exercise comes in the form of chasing my three children who are fifteen, six and two. I do find it hard to sit still for more than 30 minutes. I am constantly up and moving my body, whereas before, it was the opposite. I would only move for about 30 minutes and sit on the couch for hours. 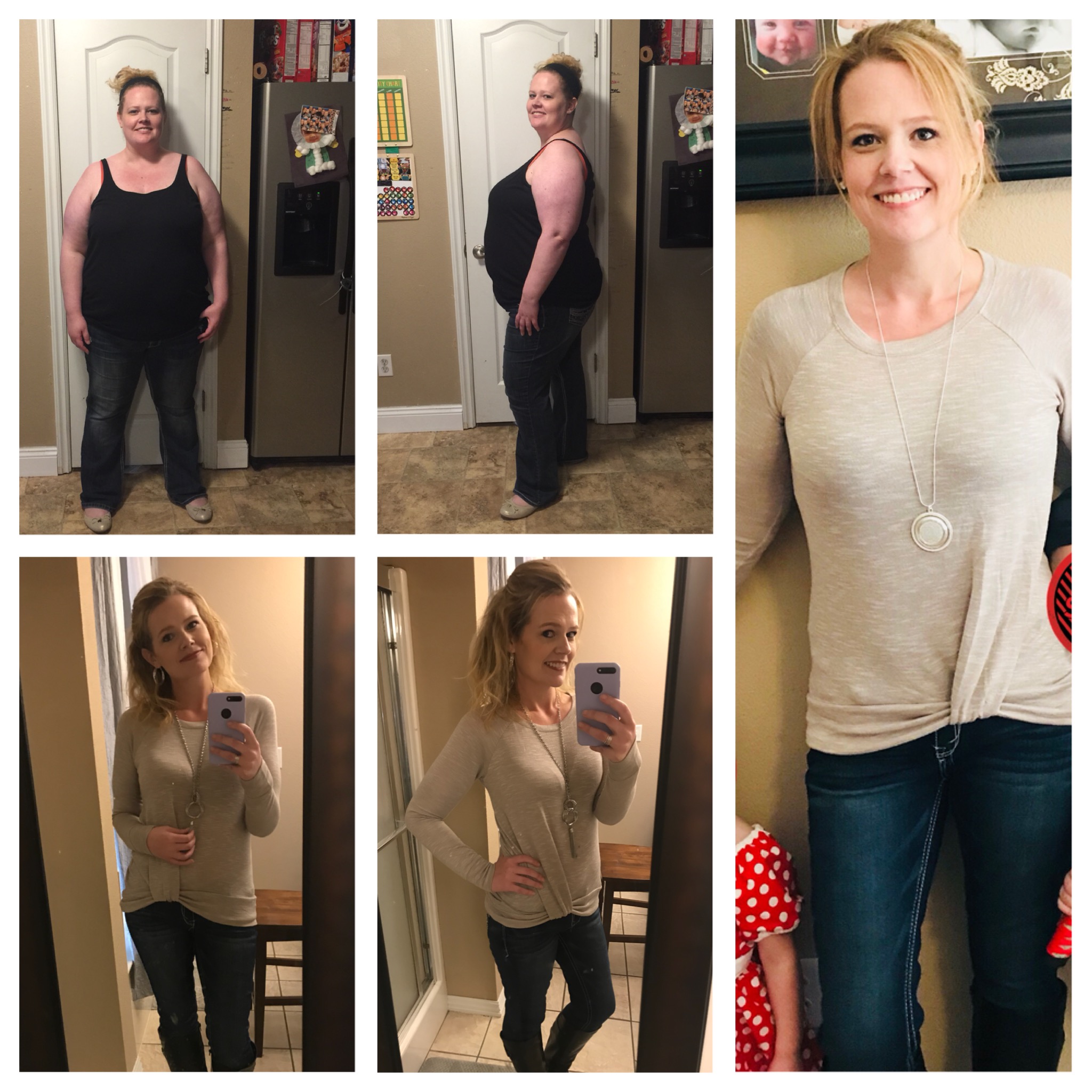