Male Before And After Weight Lost: Andrew Sheds 144 Pounds By Joining A Running Group 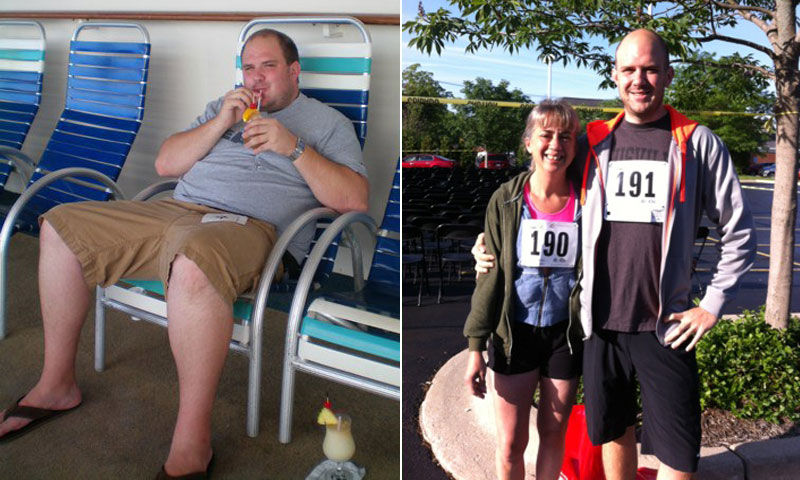 Age: 29
Height: 6’4″
Before Weight: 344 pounds. It could have been higher, but my scale wouldn’t go any higher and I never went elsewhere to see.

How I Gained It: It built up over a few years, mostly because I would just eat whatever I wanted to and whatever tasted good. Late-night snacks, oversized meals, constantly drinking soda and a lack of nearly all physical activity led to me ballooning to 344 pounds. I worked for a women’s professional softball team in Rosemont, Ill., and while I loved my job and had fun with it, the long hours and constantly busy atmosphere helped contribute to my lack of willpower with food.

Breaking Point: I had moved to Akron, Ohio, for a position with another women’s professional softball team. One day while sitting on my couch eating — yet again — and chatting with my youngest sister over FaceTime, she suggested I join a gym. She started telling me about the workouts she was doing and how she had to manage going to school full-time, working full-time and her new weight-loss goals. At that point, it just kind of hit me that I was way overweight and needed to make a change. If she could work, study and still find time to hit the gym, I had no reason why I couldn’t when I was just working and being lazy.

How I Lost It: My journey started off slowly. I tried to get to the gym three days a week and make healthier food choices. I focused on just accomplishing a short amount of time on the elliptical and built my way up to beginning a run/walk interval program on the treadmill. In the kitchen, I worked on making my meals instead of ordering fast food. The goal was more protein, fruits and vegetables and less sugar and fat. I had eggs or a protein shake for breakfast, a salad with chicken for lunch and then I’d grill something for dinner and mix it with a side of veggies. I began to shed the pounds.

RELATED:   Weight Loss Before and After: Kimber Sheds 108 Pounds And Find Her Own Kind Of Happily Ever After

My sister really put an emphasis on the nutrition side of things and taught me a lot about making good food choices and portion control. For motivational help I read a lot of other people’s stories about their weight loss efforts. One that really stuck with me was Ben Does Life.

My weight loss really sped up once I moved to Louisville last fall. I couldn’t afford to join a gym right away so I started doing the run/walk program outdoors, but it kind of got boring and I slacked off a little bit. After making it to running a slow 5K without stopping, I decided to set a goal of running a half marathon in 2013. I was never a runner growing up. I tried sports and never really made it past the recreational levels. But a local running store was offering a training program, so I took the leap and signed up. It was one of the best decisions I made toward losing weight and getting in shape. What made such an impact on me and kept me going was the people involved, the coaches and store employees and the other participants. Without the social atmosphere and the feeling of being part of something bigger than just running, I know I wouldn’t have stuck with it. Four months later and 144 pounds lighter, I crossed the finish line of the Kentucky Derby Festival Half Marathon in two hours, seven minutes and some change, marking the “end” of my weight loss journey.

Now, I look forward to and enjoy running. It’s become a part of my daily life. I work for a running store in Illinois near where I grew up. I hope to turn that into a career working for a running shoe brand so I can travel around meeting people and hopefully inspire them with my experiences. I’ve always been a laid-back person, but I feel the weight loss has given me more confidence, especially with people I don’t know. I’ve realized I can do what I set my mind to. It’s definitely relieving not having to worry about fitting into the seat at a ballpark, how tight the seat belt in a car is, how large a pair of pants I’d have to buy (size 46 at one point).

I caused my own weight gain, I was responsible for getting that large and now that I’ve taken ownership over my body, I’m overall much happier that my health and body image is in order. Another positive change I’ve noticed is that I lost some of the food intolerances I had when I was larger. I continue to eat healthy, but I do make room to enjoy treats from time to time. Eating food in moderation and my dedication to running has been key in the whole process and will be the rest of my life. This Thanksgiving I plan to run my second half marathon and first as a “coach,” as I’ll be helping my sister train to cross the finish line for her first half-marathon. Next year, I’m setting my sights on the 2014 Chicago Marathon as my first 26.2-mile race.

Related Items100 Pounds LostmenOver 100 Pounds LostSEO
← Previous Story Men Before And After Weight Loss: Tony Loses 225 Pounds For His Family
Next Story → How I Lost 190 Pounds: Keith And Amanda Lose The Weight Together