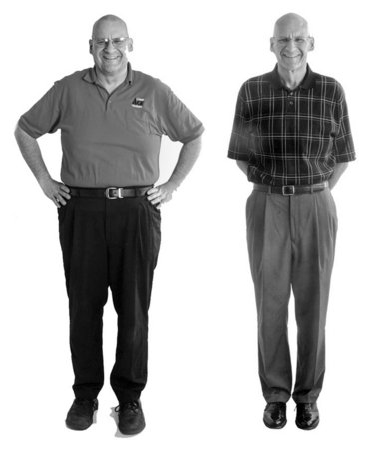 Regular exercise is now an integral part of his life

• Personal life: Hetzel and his wife, Lisa, have an 8-year-old son, Christopher. Hetzel works at Cowan Ace Hardware in Conyers. He and his family live in Conyers.

• Turning point: “I’ve always been a big man; I carried it well,” he says. “Being a big person, even when you see yourself in the mirror, you don’t see how big you are. I dressed nicely and I looked OK being big. I always felt kind of comfortable. I never thought it was a real big issue. I’ve always kept up with my doctor. She always told me to lose weight and I never really paid much attention to it.”

In time, he found himself on medicine to control high blood pressure and high cholesterol. When he started to feel tingling in his arm, he took notice and headed to the hospital. “They kept me for tests that weekend and everything turned out OK,” he says. “It was time for a change or [I’d be spending] more time in the hospital.”

He started by walking in his neighborhood. “When I first started, I was exerting myself. I was tired and it was hard,” he says. “By two weeks, I was feeling the difference already. I decided to start running at a slower pace; next thing I know, I’m running.”

A friend encouraged him to enter a 5K race. In training for that race, he got his weight down to 270, but after the race it started to creep back up to 280. Then he saw an article in the Rockdale Citizen newspaper about a local competition: the Rockdale Scale Down. He applied to be a contestant and was accepted. Tailored after the NBC show “The Biggest Loser,” the 24-week program included a 6-month membership to Gold’s Gym and the assistance of personal trainers, a registered dietitian and a life coach.

• Diet plan: “Before all of this, I was a fast-food, fried-food person,” he says. Once he started the program and began working with a nutritionist, he started eating 1,500 calories a day over the course of four to five meals a day. For breakfast, he eats cereal. “The key I found was servings,” he says. “I used to think if I had a bowl of cereal, that would be something good. I was [actually] eating maybe three to four servings. So with a bowl of cereal and milk, I was already at 500 calories because I had so many servings. I use a scale now and I weigh everything.”

• Exercise routine: “I exercise daily,” he says. During the contest, he headed to Gold’s Gym almost daily. Three times a week he started his day at 5:15 a.m. with a cycling class. On Tuesdays, Wednesdays and Thursdays, he was with trainers doing a variety of workouts. On weekends he would run or go early to the gym for a workout. “The exercise did overtake me a bit, but I was not in any way neglecting my family,” he says. “We all got bikes and started bike riding. We take the dog on walks. There’s a lot we do as a family that includes exercise without really knowing it’s exercise. There has to be movement; there is no weight loss without movement.”

• Biggest challenge: “This has become such a part of my life now I don’t find it super-challenging to be exercising regularly. At first it was difficult to get started,” he says. What was challenging was losing weight with a group. “With my group of friends and neighbors, I’m great at a party.” He’s more reserved with people he doesn’t know. “Once I got to know everyone and everything, no problem.”

• Munchie antidote: “I cut way back on what I was eating and how much, but if I really was craving something, I had it,” he says. “It would be one day or one meal and then back to the plan.”

RELATED:   Male Before And After Weight Loss: Tony Lost 175 Pounds With A New Way Of Thinking

• Secret to success: “One is the love of my family. I did this for me, but this was done for my family and Christopher,” he says. “The biggest thing that kept all of us going was the teamwork. The camaraderie of the team, the accountability of the team — I knew I had to be there. They were counting on me to keep losing and working.”

• How life has changed: “I was not an unhappy person being large,” he says. “I have a nice life. I have a great family, a good job. We can pay the bills. I was not a miserable person to begin with. However, the change has given me more energy, given me an outlook that I can do anything I want to do. I don’t want to make it seem like if you’re a skinny person, life is good because it’s [more than that]. My son has seen something that was so difficult for me to do, like lose all this weight. He knows how difficult it was, if I can do that, he can achieve anything he wants to do, in his school work — in whatever he does.”

On July 21, the contest ended and Hetzel won based on his percent of body mass lost. He won an assortment of prizes including: $2,000, a $100 shopping spree at Belk and a one-year family membership to Gold’s Gym. He’s quick to emphasize that the prizes were not what motivated him.

“I really bonded with the group. We’ll be friends forever, I’m sure we’ll get together at different family activities. The whole Rockdale Scale Down program was a huge, huge success.”