Jennifer Slimmed Down For Summer Sports 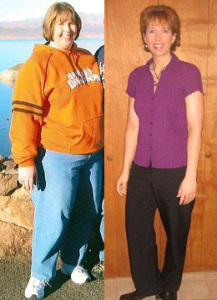 How I Gained It: I was a very active child and teenager and was involved in many sports throughout high school. Weight was never an issue for me. I was thin and ate whatever I wanted and didn’t think twice about it. After high school, I went to college and played volleyball my freshman year. About six weeks after volleyball ended, I remember my jeans getting tight — I even had to buy the next size up! I gained about 30 pounds over the course of the next three years and my activity level decreased a lot. I also got married and had a baby during college so that left little time for any physical activity. After the birth of my son, I didn’t lose all the weight. On top of that, after I graduated from college, I started a desk job. Sitting at a desk all day, not exercising, and not changing my eating pattern is how I became 318 pounds.

Breaking Point: My breaking point came in April of 2007, after I had been having stomach issues off and on for over a year. I had some blood work done and a nurse called me to inform me of those results. She said, “Jen, I have some good news and some bad news. The good news is there is no ulcer; the bad news is your blood work indicates that you are diabetic.” I was so shocked and unprepared for those words. Diabetes runs in my family, so the cards were stacked against me, and my weight contributed to it. I made a follow-up visit the following week to discuss this with my physician. She told me I had to lose weight or I would face the consequences. She introduced me to Weight Watchers and said that she and her sister both had great success on the program. She also said that she would give me three months to see what I could do with my weight before she put my on any medication for my diabetes. I joined Weight Watchers the next week.

RELATED:   Weight Loss Success Story: Dana Loses 61 Pounds And Gets Her Body Back

How I Lost It: The way I lost it was simple — I followed Weight Watchers and got involved in physical activity. I learned how to eat, what to eat, and how much I should be eating. It also taught me to journal and keep track of everything that went into my mouth. However, I went beyond Weight Watchers and totally cut out all fried and sweet foods due to my diabetes. Following the program for me was quite easy and because of that, the weight came off easily. The first 100 pounds just melted off, but the remaining weight was a little more of a struggle. I reached a couple of plateaus, but kept chugging along and the scale finally began to move again.

I truly believe that one can’t lose weight with diet alone. Exercise has to play a part in the plan. In the beginning, I started off by walking a a quarter of a mile — that is all I had in me. I gradually increased my exercise over time and have added a wide variety of activities. I walk/jog (interval train) four to five miles a day, seven days a week. My routine also includes water aerobics, Pilates, exercise videos and weight training — I lift weight two to three times a week.

RELATED:   Weight Loss Before and After: I Lost 105 Pounds With Diet And Exercise

Becoming active again has been amazing. I water skied in 2008 for the first time since I was a senior in high school — what a rush! It was an amazing feeling. I also began playing competitive co-ed softball and volleyball.

I still follow Weight Watchers today — for me, maintaining is actually much harder than losing the weight ever was. It is a constant struggle and I know that this will be an ongoing life challenge. However, I believe in the program so much that I became an employee about a year ago — I’m now a scale receptionist at a meeting one night a week, which has helped me stay focused and keep on track.

I’m such a happier person today and have so much more energy. When I was heavier, all I wanted to do was sit on the couch at the end of the day and do nothing. Today, I couldn’t be a couch potato if I tried. I just want to go, go, go. I am loving life and living it to the fullest.

Jennifer met her goal weight on December 23, 2008 and has maintained it ever since.