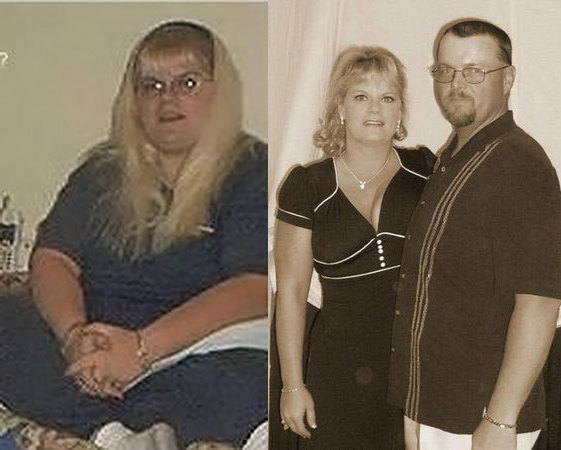 How long she’s kept it off: Powell started her weight loss journey in March 2006 and reached her goal weight in October 2008. She’s kept it off five months.

Personal life: Powell is a stay-at-home mom with two children, a daughter, 14, and a son, 10. “I’ve been with my husband now for 12 years; we just moved back to Douglasville two years ago.”

Turning point: “A few months before I started, I was coming up on my 10-year class reunion,” says Powell. The reunion motivated her to lose weight. Powell knew she had polycystic ovarian syndrome, but without health insurance, she was unable to remedy the endocrine disorder. PCOS is a leading cause of infertility. Because insulin resistance usually accompanies this hormonal imbalance, losing weight through diet and exercise alone is difficult without insulin-sensitizing medication or medical help.

“When I went to the doctor in the middle of 2006, they put me on Glucophage. Within the first two months, I had lost 40 pounds,” she says. “That was the real wake-up that it wasn’t my fault — it was hormones that were causing me to get bigger and bigger.”

RELATED:   Weight Loss Before and After: Nicole Lost 52 Pounds After Pregnancy

Diet plan: “I never followed a set plan,” she says. “I slowly started making every meal like a toddler plate.” For breakfast, she has a small cup of applesauce or cereal and sometime eggs. Lunch is a small peanut butter sandwich or soup. Dinner includes vegetables and lean protein.

Exercise routine: “A lot of my main exercise has been stretching,” she says. “A friend of mine told me a lot of what I do is more like yoga. I just went with where I felt the pull or burn — it was actually quite relaxing. If week one, I walked on the treadmill, I [didn’t] walk on it for a week or two. I constantly changed what I did to keep my body from getting used to anything or me getting burned out on it.”

Biggest challenge: “Actually everybody’s attitude,” she says. “It was a huge shocker; I think that’s what fed my fuel. The more people would [criticize] the idea of going for a 100-pound weight loss goal and say it was impossible, I was more and more determined to prove [them] wrong.”

How life has changed: “I can’t even begin to describe the joy you feel when you set a goal and then go beyond it. There’s an inner peace in yourself that you can do anything,” she says. “I wanted to show everyone you can do it and not spend a ton of money or sometimes any money. I didn’t buy any special foods that were something we couldn’t all eat like normal.

I used my house as the gym from walking up and down the stairs extra times. It may have taken longer than most people take to lose that much weight, but it was all done slowly, healthy and free. Every change you make has to be something that you can do for the rest of your life, not just for a couple months to get the weight off.”