Weight Loss Before and After: I Learned It Was Never Too Late To Lose Weight And Dropped 80 Pounds 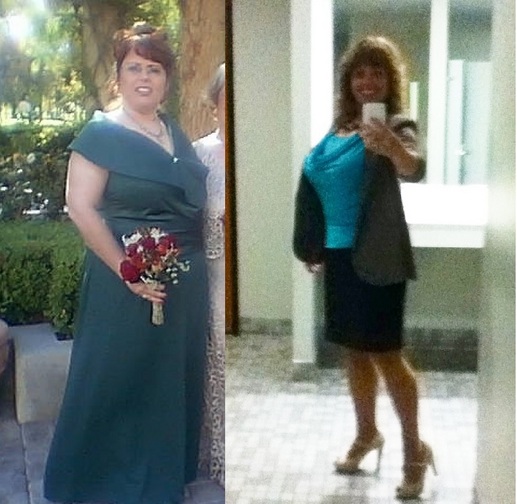 I have battled weight for most of my adult life. I’ve been on many different diet programs over the years with the same pattern of results. I would lose the weight within 8 to 10 months, but after “suffering” with a diet, I would “relax” once I reached my goal, and within 1 to 2 years, I would regain all of the weight plus another 5 to 10 pounds. By the time I reached my 50’s, I was close to 220 pounds, and that’s a lot for someone who is 5’2″. But I just bought larger and larger clothes and convinced myself that I wasn’t “that fat” until I hit my 52nd birthday. I attended a party where the host had a photographer and the pictures were posted on-line. I looked at the photos I was in and gasped because I did NOT recognize that “fat lady” in the photos!

I knew then I had to do something, and it had to be a fundamental change in how I approached food. I realized that I was addicted to sugar, bread and “junk” food. It would start in the morning as I was never hungry when I first woke up, but by the time I got to work , I would be starving. I would grab something quick and convenient – perhaps a donut, bagel or fast food breakfast, and that would start the “sugar” cycle for the day. Within a couple of hours I would be “starving” again but with strong cravings for junk food. “Healthy” food just did not appeal to me. I felt helpless to stop this cycle and feared I was heading down the road to diabetes and other obsety related health problems.

After reading comments from someone espousing the benefits of Ceylon Cinnamon, I did some research and decided to try it. I also came across information on the benefits of Coconut Oil. So I bought Ceylon Cinnamon capsules and Coconut Oil capsules and started taking them. I sat down and wrote out a nutrition plan that consisted of 1200 to 1500 calories per day comprised mainly of protein, vegetables, beneficial fats, one to two servings of fruit, and “slow” carbs such as brown rice, sweet potato, steel cut oatmeal (not instant oatmeal!) and sprouted grain bread. I also found a nutrition bar (Zing) that was nutritionally balanced, wheat and soy free, and made the perfect breakfast during the week because I could take it with me and have either in the car (while sitting in traffic) or at work.

My plan included a breakfast, mid-morning snack (apple or orange), lunch, mid-afternoon snack (almonds or walnuts), dinner and a desert snack. I found that the cinnamon and coconut oil helped to drastically reduce my cravings for sugar and junk food, and after about 2 weeks, I had no desire for cookies, candy bars, bread, and all of my former weaknesses.  I added some additional supplements including Green Foods, Spirulina, garlic, magnesium, and apple cidar vinegar capsules or tablets. I made sure to drink at least 8 glasses of water every day, and I cut out soda and fruit juice.  If I miss the “bite” of soda, then I have sparkling water.  I swapped cane sugar for Coconut Sap sugar, and found the benefits of cooking with Coconut Oil.

I made a New Years Resolution for 2013 that I would start an exercise program, and on January 1, 2013 I signed up to join the local 24 Hour Fitness center and bought an introductory personal training package. I started working with a personal trainer doing weight and resistance training along with high intensity interval training (HIIT) cardio work.

Oddly enough, my weight loss stopped for almost 2 months before the pounds started to drop again, but at a slower rate. However, the inches started to fall off like crazy. From January to June, I lost 30 more pounds, and went from size 10-12 down to size 2-4. Mean while, the muscles in my arms, legs and core started to become more toned and defined.

RELATED:   I Lost 60 Pounds: Brittany Drops The Weight And Gets Healthy For Her Son

My personal trainer is a combat veteran who served tours in Iraq and Afghanistan, and he has been my mentor and coach as I “rebuild” my now 54 year old frame. I have refined my nutrition plan to include larger portions of protein, and my goal is to lose another 20 pounds where I will probably be a size 0. However, I am not looking so much at the weight and dress size as I am on how I feel, and how toned and defined I can get my muscles such as the “six-pack” and the toned arms and legs. (And shout-out to 24 Hour Fitness for being a Military Friendly employer!)

People who haven’t seen me in awhile don’t recognize me at first. Other people who didn’t know me before mistake me for being 10 to 15 years younger than I am. I can’t even describe how much better I feel these days. I no longer have those out of control cravings. I don’t get the “shakes”, or the headaches that used to plague me on a daily basis. I used to have to stop walking halfway up a flight of stairs because I would be out of breath. Now I can run up six flights of stairs with ease. I can go into a clothing store and try on almost anything instead of being relegated to the “Plus Size” clothes where I would desperately try to find something that fit that didn’t look like a tent. I don’t have to rely on some diet program’s pre-packaged food. I almost feel like I’ve been reborn. I look at the “Before” photos and realize how I let myself get trapped in a vicious cycle that was leading me down a path of poor health.

So at my age, I was able to turn around 30 years of bad eating habits and poor exercise. It’s never too late to start down a better path of proper nutrition and proper exercise that includes weight training and interval cardio.