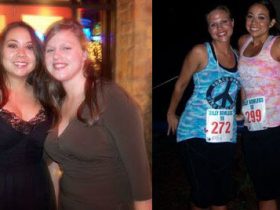 On May 10, it’ll have been six months since I hit my goal weight and maintained it. Below is the column I wrote for the newspaper I’m an editor for, The Greeley Tribune, in January sharing my journey. The rest is history.

The first thing almost everyone says to me is “What made you do it now?”

And I never have a good answer. There wasn’t a huge event in my life, a health scare prompting change or an epiphany one morning that today was the day I was going to start losing weight. It all just sort of came to fruition, pieces of a puzzle that fell perfectly into place that would end up changing my life.

It was actually a slow transition at first. Sometime in early winter 2012 I started taking baby steps. I didn’t drastically change my eating habits, but started cutting back on portion sizes, skipping desserts, really paying attention to what I was eating, every time I ate something. I started losing pounds off my 5-foot-5-inch, 235-pound frame. I still remember my grandma being the first person to say something at Christmas. My family thought it was a new haircut, but my grandma, with her grandmotherly instincts, knew better and remarked it was my face that was getting thinner.

I remember how great it felt someone acknowledging the work, even if it was just a little so far, I’d done. I’d seen the progress and so had others. I was hooked and there was no turning back.

After celebrating the holidays, I got to work. On Jan. 5, 2013, I started a food diary and fitness app, MyFitnessPal. It helps that I’m pretty obsessive-compulsive when it comes to making lists for everything, so tracking my food and setting a strict regimen for working out and weight-loss goals was easy.

I did research on a healthy weight for my height and frame — I’ve been blessed with a large build like my dad — and I gave myself all of 2013 to make my goal weight of 150 pounds.

I later revised that number to 143 because of some goofy story I read about Mister Rogers apparently maintaining that weight the last 30 years of his life. True or not, I loved the idea, plus it gave me some wiggle room once I got near my goal, so I went with it.

My goal put me on track to lose about 7 pounds a month or just under 2 pounds a week. I knew I’d be over my goal some weeks, under others. But it was a realistic, healthy pace for me. I reminded myself, like I would many times later, I was in this for the long haul and this is a lifestyle change, not a diet.

I’ve tried countless diets over my lifetime and none has stuck. You name it, I’ve tried it. The most weight I’ve ever lost before was in summer 2003 prior to starting college at Colorado State University. I weighed 192 pounds and lost almost 40 pounds on the Atkins diet. But then I went off to CSU, gained it all back and then some, and more over the years.

Growing up I was always very active and athletic, but through most of college and post-grad, life had become very sedentary. I maxed out at 255 pounds a few years ago. There was no incentive or motivation to do anything about my weight because behind the scenes I’ve always been very healthy — really good blood pressure, good cholesterol, no diabetes, etc. But that didn’t mean it would always stay that way. I never ate terribly bad, either. I wouldn’t sit on the couch all night eating entire bags of chips or doughnuts. I don’t care for soda. I love fruits and vegetables.

But things needed to change. And this time would be different. It already felt different. I stuck to a simple mantra of eating less and better and working out more.

I entered The Tribune’s annual weight-loss contest in the spring and won after losing 21 pounds, 9.48 percent of my total weight at the time. I remember telling my co-workers I was going to keep going, but I don’t think anyone knew how far I had in mind.

The exercise was the toughest part, as most people can attest to. It’d been years since I had consistently worked out, so I started slow. I walked a ton and danced my butt off, literally, with Just Dance on my Nintendo Wii. Walking turned into walking mixed with a little bit of jogging. Slowly it became jogging mixed with a little bit of walking. The first time I ran a mile straight I thought I could conquer anything. It was my own mini version of a runner’s high.

By summer, I had shelved the video games and was running and biking most days of the week, mixed with strength training.

My lifestyle change was in full swing. I did my first of two big closet purges. By nature I hate shopping and having to start from scratch was quite the undertaking. But the reason I was doing it was worth it.

Soon 30 pounds turned to 50. I remember aiming to weigh 175 by my 10-year high school reunion at the end of June. That morning, I weighed 174.5. Setting little goals along the way made the long-term more attainable. And I let myself splurge. I’d have ice cream every once in a while and drink beer during football games. This was a lifestyle change after all. Realistically, I’d be eating sweets and imbibing on occasion, so I had to find a way to make it all work.

I hit my goal of 143 pounds on Nov. 10, about a year after those first subtle changes.

Looking back at old photos I still can’t believe it’s me I’m staring at. Now I look more like my mom every day. At least I know what I’ll look like when I’m 50, and I’m not complaining.

I’ve documented nearly everything I’ve eaten, drank and every workout I’ve done since Jan. 5, 2013. I weigh 137 pounds as I write this column and fit in a size 6 jeans for the first time since I was in middle school. But it’s not a numbers game, although the Type A person in me loves it. I feel better about myself and for myself. I can run a mile without mentally screaming “When will it stop?” I actually enjoy shopping — in small doses. And the encouragement from my friends, family and co-workers has been nothing short of amazing. It’s been a long road, but an exciting one. And I’m happy to say that I’ll never diet again.

Nicole Durham is the copy desk chief and web editor for The Tribune. She can be reached at ndurham@greeleytribune.com. 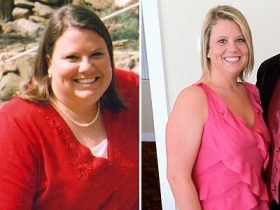