“It Feels Amazing to Be Healthy!” 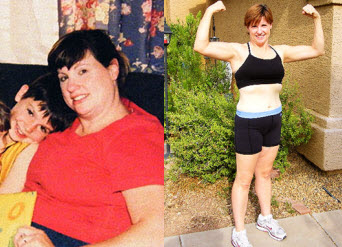 Before
“I was always saying I would get the weight off ‘someday,'” Diana Huffman said. A mom of four kids, Diana reached 220 pounds after the birth of her daughter. She had been putting herself last, which she realized was not fair to her or her children. Just before her 40th birthday, Diana decided “enough was enough.”

Diana started hiking again at Squaw Peak, a local mountain she used to hike in her 20s, and vowed to make it to the top “no matter what,” she said. “Since then I have been hiking that mountain every week along with running, swimming, biking, aerobics, and eating clean 95 percent of the time.”

“Anyone can do this,” she said. “You just have to want it badly enough.”
What’s her secret? It’s not magic, “just hard work, a commitment to exercise (anywhere and everywhere you can), and eating right.”

Related Itemsrunningswimming
← Previous Story Weight Loss Success Stories: I Lost 65 Pounds By Believing In Myself
Next Story → Weight Loss Before and After: I Finally Lost The Weight And Dropped 50 Pounds