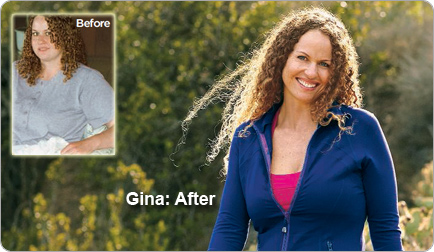 Weight Loss Success Stories: Gina’s Challenge
While she’d always been on the larger side, Gina’s weight shot up in her 20s. “My father had a heart attack, which scared me into quitting smoking,” she says. “So I ate every time I craved cigarettes.” Before long, she had hit 251 pounds.

Diet Tip: Become an Example
When Gina’s son celebrated his first birthday, she started thinking about what she was teaching him. “He needed to see there was more to life than fast food and TV,” she says.

Diet Tip: Create a Plan
Needing structure, Gina joined a compulsive eaters support group and started following their diet plan. “It was tough cutting out white flour and sugar, and I felt hungry all the time, but it got easier,” she says. Gina also got off the sofa to walk around her neighborhood, eventually adding exercise videos and workout classes at a gym. After 11 months, she had dropped 76 pounds.

RELATED:   Men Before And After Weight Loss: Marcus Drops 105 Pounds With A Positive Attitude

Diet Tip: Finding Strength
Gina believes her son helped her get to where she is—and stay there. “Ev-‘m sick of working out and eating well, I keep at it. I never want to stop being a good, healthy role model to him,” she says.

Gina’s Stick-With-It Secrets
1. Trick your taste buds “I mimic the texture of my favorite foods. Instead of ice cream, I make a smoothie with lowfat milk and a banana. It’s cold, creamy, and low cal.”
2. Talk it out “When things don’t go my way, my reaction is to turn to food. But I’ve learned to call a friend and vent instead of immediately heading to the fridge.”
3. Exercise in the a.m. “I put on my workout clothes as soon as I wake up—before life gets in the way and I get side-tracked. Once the sports bra and sneakers are on, I have to go to the gym.”

RELATED:   How I Lost 125 Pounds: Elliott Makes Exercise A Priority And Gets Fit