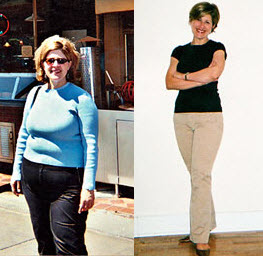 Christy Jared was overweight most of her life, thanks to mindless eating and zero exercise. But working a hospital night shift caused her to gain 40 pounds. “I would eat just to stay awake: burritos, pasta, and pizza. Before I knew it, I was 236 pounds, the biggest I’d ever been. It was depressing,” recalls the 44-year-old RN.

In 2001, Christy used a move to New York City from her home in Austin, Texas, as an opportunity to change her lifestyle. She entered grad school to study nursing administration and started seeing a therapist who encouraged her to lose weight. He also referred her to a nutritionist who gave her diet guidance.

“I learned to eat more fiber and lean protein and pick healthier snacks like Laughing Cow Light cheese wedges, so I never felt deprived,” she says. Christy also joined a gym, hitting the treadmill or stationary bike three days a week. To her amazement, she lost 11 pounds the first two weeks. Living in New York City with no car was a bonus: Christy started walking everywhere. After three months, she added weight training twice a week, and she continued to lose about three pounds per week. Within a year and a half, she had shed 86 pounds and went from wearing a size 18 to a size 6.

Christy has kept the weight off for more than a year and moved on to new challenges: She recently returned from a medical delegation in El Salvador, where she trained doctors and nurses in cervical cancer screening. “We saw 518 patients in one week. Losing weight has given me the confidence to conquer just about anything.”

RELATED:   Working Out the Stress

Christy’s Weight-Loss Plan
My Diet: “For breakfast, I have two scrambled eggs, half a grapefruit, and a small whole wheat bagel. Lunch is a turkey burger. Dinner is whole wheat pasta with meat sauce. Snacks are Balance Bars, nuts, and raisins.”

My Guilty Pleasure: “Any kind of chips. I try to stick to soy crisps — only 70 calories and 1.5 grams of fat per ounce.”

My Workout: “I do 40 minutes of cardio and 20 minutes of weight training three times a week and ride my bike in Central Park for 45 minutes twice a week.”