Weight Loss Before and After: Georgia Won The Fat War And Lost 40 Pounds 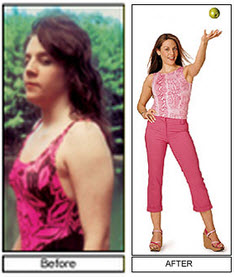 She used a home team advantage to lose 40 lb.

I’d taken some pretty hard knocks when I played high school soccer and volleyball, but nothing prepared me for the news I got 4 years ago: “Your weight and cholesterol are too high; you’ve got to lose weight,” my doctor bluntly warned. It might not seem like a big deal, but it was a rude awakening for me. I was only 24 years old, and I had always thought of myself as athletic and healthy, despite the extra pounds I carried around.

In my teens, I figured that all the exercise I got at practices justified my eating pints of ice cream with lunch and candy bars for afternoon snacks. Problem was, I had stopped playing sports years ago and was still eating huge portions of high-fat, sugary foods. The pounds quickly added up. That day in the doctor’s office, I weighed in at 170 and was being told that I wasn’t healthy after all. Two months later, as I struggled to zip up a size 14 gown for New Year’s Eve, I broke down in tears. I hated the way I looked.

On New Year’s Day 1999, I made a resolution to lose 40 lb. My first step was easy to recognize–no more fast foods and fried foods. Since I had never paid attention to nutrition and knew nothing about dieting, recognizing what to do next was harder. I didn’t realize how large my portions were or how hard it would be to resist midnight cravings. Fortunately, my mother, who had never been overweight and was always healthy, was happy to offer her support.

Instead of fat-laden fried egg and bacon sandwiches, she suggested cereal with fat-free milk and fruit for breakfast. And for lunch, a turkey sandwich and an apple. Instead of heaping my plate at dinnertime, I had her show me what reasonable portions are, and I didn’t go back for seconds. And a note on the fridge saying, “Sorry, we’re closed” helped curb those late-night cravings.

It’s amazing how smart your parents are once you outgrow the know-it-all teenage phase! My dad also had good advice: “No food is forbidden. You shouldn’t deprive yourself all the time, but you can’t eat everything you want.”

When I started eating “real” food instead of empty junk calories, I was so much more satisfied. Almost immediately, the weight started coming off. As I became more used to eating smaller portions, I customized my diet more. I found that I really liked eating smaller meals more frequently, because it kept me from getting overly hungry.

Following my mother’s advice to “eat like a king in the morning, a prince at noon, and a pauper at night,” I’d eat an egg-white omelette, tomatoes, and a slice of multigrain bread for breakfast. Two hours later, I’d have half a grapefruit and a small fat-free yogurt. For lunch, I’d have a garden salad. In the afternoon, I’d snack on an apple. I liked veggie burgers and fresh steamed vegetables for dinner. Dessert was sugar-free Jell-O topped with fat-free Cool Whip.

RELATED:   How I Lost Weight: Sue Lost 156 Pounds And Finally Found Herself

Back in the Game

I knew I couldn’t count on diet alone to shed the weight, so about a month after I started my weight loss plan, I joined a gym. Three times a week, I’d ride the stationary bicycle or walk on the treadmill for 40 minutes. Then I’d do a series of arm exercises with 5-lb weights and about 20 crunches to work my abs. After about a month, I was ready to increase my intensity. I began working with a personal trainer who helped me mix up my workouts with strength training, aerobics, and kickboxing classes. I still work out three times a week and walk as much as 2 hours every day.

By the end of 1999, I was down to 130 lb, and my cholesterol was normal. I couldn’t have done it without the support of my family. Wanting to help others in the same way, I became a certified personal trainer. I cheer my clients on, telling them, “I know it’s hard, but you can do it. Trust me. I’m living proof.”

Georgia recruited her parents for support. If you don’t have family nearby, here are some other options:

# Check the yellow or blue pages of your phone book for local weight loss support groups such as Weight Watchers or Overeaters Anonymous.

# Find a role model. Ask a friend, neighbor, or coworker how she reached her weight loss goals.

# Make friends with other dieters on Prevention’s weight loss message board. You’ll find an ear 24 hours a day.