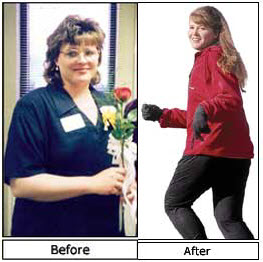 “I tweaked my eating habits and lost 70 pounds”

Other Health Benefits: More energy, no longer suffers from varicose veins or bronchitis, skin improved, and rarely gets sick

I knew I was heavy, but I was busy. I worked full-time, went to school at night, and had two kids to chase after. I didn’t have the time or energy to eat right or exercise, and I was under too much stress to quit smoking.

At least, that’s what I thought, until one day in December 1997. After walking up a flight of stairs, I found myself gasping for air. I weighed 230 lb, my legs hurt from varicose veins, I had acne, and I was suffering from another bout with asthmatic bronchitis, a condition that plagued me every year. I went to my car and cried. I had to do something, I thought, or I wasn’t going to be around to see my kids grow up.

If anyone ever began at square one, I was that person. I’d always been heavy, and I knew nothing about nutrition and exercise. Over the years, I’d made a couple of halfhearted attempts to lose weight by sipping diet shakes or experimenting with cockamamy diets, such as the grapefruit diet, but I’d give up after a week or two.

This time, I decided to make just a few small changes to what I was already eating. Instead of ordering an enormous cheeseburger and fries for lunch, I started ordering a small burger and a salad. Sometimes, I’d forgo burgers entirely and get a Subway sandwich.

The change in my diet was so subtle that I didn’t miss my old habits, and I actually felt more energetic after eating a lighter lunch. Encouraged, I made my next change: I gave up the sugary convenience-store cappuccinos I’d been drinking several times a day for lower-calorie vanilla hazelnut tea. Again, I hardly noticed the difference. What I did notice was that my clothes were getting a little looser, and I had to buy a belt to hold up my size 22 pants.

I knew I was on to something, but I still didn’t think of myself as being on a diet. Dieting meant counting calories, weighing myself constantly, and eating little scoops of cottage cheese for lunch. I was just trying to be a little healthier.

For my third change, I gave up the giant-size, convenience-store chocolate-chunk cookies I always ate for breakfast. One morning, I went to the bagel shop next door instead. It wasn’t quite the same, but I quickly got used to my morning bagel and cream cheese, which eventually became light cream cheese. I still allowed myself to have the cookies, but only as an occasional treat.

In the grocery store, I began reading labels more carefully. I switched from the frozen Salisbury steak dinners my family liked to lower-fat frozen entrees.

During my annual physical in January 1999, just more than a year after I’d started tweaking my eating habits, I discovered I’d lost 35 lb–without dieting! I left my doctor’s office with renewed determination.

Inspired by my success, I decided to add more activity to my daily routine. Instead of an occasional lunchtime walk, I began walking regularly. Every evening, I took the dog out, and before long, I was walking 3 miles a day. Often, my kids and husband, David, tagged along. When the weather precluded walking, I started using workout videos, such as Tae Bo and Richard Simmons.

As the weight came off, exercising got easier, but one thing still held me back. My smoking left me winded. Seeing what I had already accomplished and how far I had come, I knew I was ready to quit. Three days before Thanksgiving, I gave up my two-thirds of a pack a day habit, and I’ve never looked back.

When I returned to the doctor’s office in January 2000, I’d lost another 30 lb. A few months and 5 lb later, I bought a pair of shorts–something I never would have done before. Imagine my husband’s shock when he saw me in size 14 shorts! He kept saying, “Wow, is that really you? Where are you?”

But it wasn’t just my body that was changing. My improved habits were affecting the rest of the family’s eating and exercise patterns too. David’s cholesterol dropped from 202 to 185, and my once-chubby son, who had complained about being the slowest runner in the fifth grade, had sprouted into a slim seventh-grade basketball player. Short of an infrequent cold, none of us have gotten sick in 2 years, and we are doing more together–walking, camping, and canoeing–than ever before.

Five years ago, I never would have believed such modest changes could have such a profound impact on my life and on the lives of the people I love.

# At parties, she serves baked corn chips and salsa instead of potato chips and sour cream dip.

# For snacks, she eats air-popped popcorn sprinkled with soy sauce instead of the buttered microwave kind.

# At sub shops, she orders extra vegetables rather than cheese on her sandwich.