“I Weighed More Than Him.” Cyndy Lost 50 Pounds! 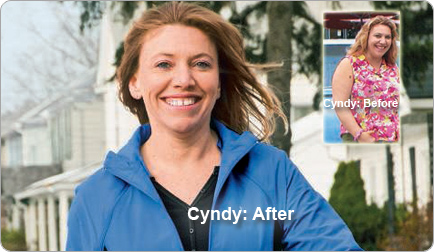 Weight Loss Success Stories: Cyndy’s challenge
A trim 130 pounds in her teens and 20s, Cyndy didn’t gain weight until she got pregnant eight years ago. That’s when she put on 73 pounds—losing only 20 of them after giving birth. Thanks to lots of snacking and fast food, the needle on Cyndy’s scale got stuck at 183.

Diet Tip: Get Inspired
Cyndy didn’t feel the need to slim down until her husband started eating healthier and working out. “I still remember the day he stepped on the scale and I saw that it read 180 pounds, which was less than I weighed!” she says. “Being heavier than he was was a huge shock—I realized at that moment that I had to change my lifestyle.”

Diet Tip: Kicking Bad Habits to the Curb
To be successful, Cyndy knew she needed to nix her post-dinner noshing. “I would eat at 5, so by 8, I’d be starving again,” she says. “I snacked all evening on chips and cookies. What’s more, I even stocked chocolate in my nightstand drawer so I could eat while lying in bed!” To stop her stomach from grumbling after dinner, she started drinking a glass of water with a powdered fiber supplement mixed in. She also talked to a nutritionist, who told her she should boost her veggie intake. “Every night I’d make two separate healthy sides, like a salad and green beans or broccoli, to go with a protein, like chicken or pork,” she says. “I felt fuller than when I’d just eat protein and a carb.” After two weeks, she lost 5 pounds. “I thought, ‘This is really happening!’ It was the motivation I needed to keep going.” Soon Cyndy started walking regularly. “My daughter was just learning to ride a two-wheeler at the time, so I’d try to keep up with her as she pedaled along; it was a pretty good pace,” she says. “And even if I didn’t feel like going, I couldn’t say no to her.” To tone her muscles, Cyndy also did strength-training moves, like sit-ups and crunches, at least three times a week at home. In just under a year, she got down to 133 pounds.

Diet Tip: Keep Moving Forward
While Cyndy was thrilled to be part of a fit family (her husband ultimately settled at 177 pounds), she knew it was going to take hard work to maintain her new body. “I still have to be careful about what I eat and keep up with my workouts,” she says. “But it’s so worth it. I’ve gotten addicted to taking care of myself. These days I don’t want to put food like candy bars into my body, because I look good, I feel better, and I’m so much happier.”

Cyndy’s Stick-With-It Secrets
1. Keep healthy food in sight “I have a fruit bowl on my kitchen table, and it’s always full. When I’m hungry, it’s the first thing I see and, therefore, what I reach for.”
2.Leave a paper trail “I weigh myself on Sundays and track it in my planner. It helps motivate me—I don’t want to write a larger number than the week before!”
3. Go ahead and play “Working out needs to be fun, so my family and I like to go swimming and biking, or even bounce on the trampoline in our backyard.”